Implications of LeBron James' Decision Will Reverberate Throughout NBA 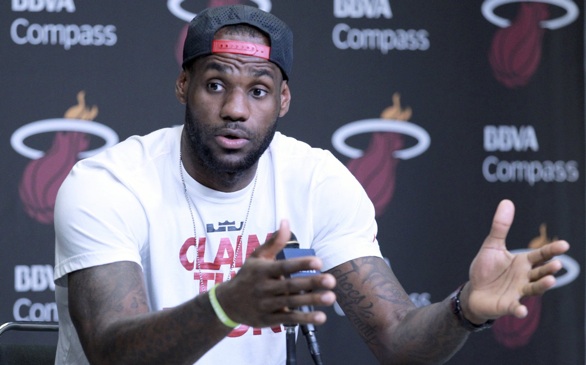 (Los Angeles Times/MCT) LeBron James' going home to Cleveland will have implications far outside the confines of the 216 area code in the NBA next season.

The Cavaliers, of course, become the immediate favorite in the Eastern Conference, particularly if they can engineer a trade for Kevin Love or if top challenger Indiana fails to retain Lance Stephenson. Regardless, a core of James, point guard Kyrie Irving and No. 1 draft pick Andrew Wiggins is unequalled in the East and one of the most intriguing trios in the league.

Houston could overtake San Antonio, Oklahoma City and the Clippers in the Western Conference if Chris Bosh decides to join the Rockets. Houston General Manager Daryl Morey would then probably match the offer sheet that free agent Chandler Parsons signed with the Dallas Mavericks, giving the Rockets a fearsome foursome of Dwight Howard, James Harden, Bosh and Parsons.

Dwyane Wade is one of the bigger losers in the James-to-Miami decision, probably staying with the Heat for less money to become teammates with Josh McRoberts and Danny Granger. The Heat could struggle to make the playoffs, with one betting website making them a 50-1 shot to win the title next season, the same as the New Orleans Pelicans.

Carmelo Anthony could still change the balance of power in the East, but only if he opts to sign with the Chicago Bulls to team with Derrick Rose and Joakim Noah. If Anthony stays with the New York Knicks, they’re a fringe playoff team. If he moves to the Lakers and Pau Gasol decides to follow suit, they’re probably only the sixth- or seventh-best team in the West.