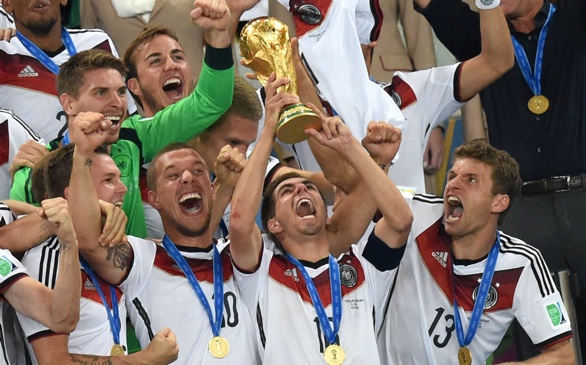 (Daily News, Los Angeles/MCT) HOLLYWOOD -- At 33 Taps sports bar and restaurant on Sunday, the German-born Stefan Oriold found himself standing next to Argentina native Vivi Rama as they both nervously watched the final match of the 2014 FIFA World Cup.

Oriold, who lives in mid-city, wore Germany's black and white jersey and shouted "Ger-Ma-Neeee!" while pumping his fists in the air when his team finally scored the first and only goal of the game in the 113th minute. The two rival fans chatted a bit and joked with one another as the game went into extra time. And when the clock ran out, Oriold cheered, embraced his wife tightly and then turned to give a tearful Rama a hug as well.

"We Argentinians criticize our country when it comes to anything from food to politics -- anything," Rama, a bass player who was born and raised in Buenos Aires, said before the game had ended. Yet "soccer is what brings us all together so this is my pride. I want Argentina to win. It's my identity."

Before Germany had scored the first goal, Oriold said his heart rate was "a bit high" and that Argentina was playing "too well" but still seemed to exude confidence.

"They're fine. (Germany) will still win. Done," the 39-year-old IT consultant said.

Soccer fans from around Los Angeles and the globe crammed into the popular sports bar located on the corner of Hollywood Boulevard and Vine Street, witnessing powerhouse Germany capture the World Cup Championship for the fourth time and ending a 24-year wait to do so.

"Amazing. Amazing. I forgot all (about) my hangover," said Germany fan Arisa Heitz, 23, of Hollywood, who is half-German inside the bar. "It's pride. It's excitement. I'm very proud of my heritage. It's an awesome sport. Argentina played a good game but hey, I knew Germany had it."

Like many others at the bar, Dan Nesser, 42, of Hollywood was rooting for Argentina since he's a huge fan of "Argentinian superstar" Lionel "Leo" Messi, who was named best player of World Cup 2014 after the game.

"Argentina and Brazil hate each other and for Argentina to win in Brazil would be fun, like a dagger in the heart," Nesser said before the game. "It's a very big deal in South America."

But Argentina's loss is a costly one for Nesser. He said he bet one friend $100 that Argentina would beat Germany, and wagered a dinner at Ruth's Chris Steak House in Beverly Hills with some other friends who are Germany fans.

But not everyone at the sports bar came to see the game. Mark Wood, 53, of Simi Valley was looking for a quiet place to have a beer while his girlfriend and a friend were watching a musical at the Pantages Theatre. He said he hadn't realized the World Cup final would be on tap until he strolled into the bar.

"I'm rooting for a place to sit down, to get a nice cold beer and am waiting for all this to be over," Wood, a self-described ex-jock from his high school football days, said. "America is (already) out. I root for them very four years but when it's over, it's over."