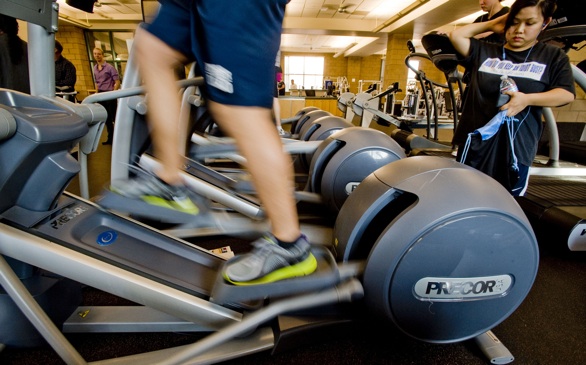 Research at Michigan State University found that college students who join a gym during their freshman and sophomore years will probably have higher GPAs than those who don't (via Huffington Post). More specifically, the study found that these students actually joined recreational sports and fitness centers on MSU’s campus—not just your typical 24-Hour Fitness.

The researchers analyzed 4,843 students in their sophomore and freshmen years. They compared the GPAs of those who had a fitness facility membership to those who did not. Not only did the students with memberships have higher GPAs, but they also stayed in school longer; the two-year retention rates increased by 3.5 percent.

Last week, Campus Circle reported that the retention rates in the U.S. are worrisome; fewer first-time students are returning to their colleges and universities to complete their education. MSU's findings could provide some insight on how to fix that.

"These results provide a compelling argument to universities that a higher student retention rate could be enhanced just by having adequate recreational and fitness facilities for students,” said James Pivarnik, a professor of kinesiology and epidemiology at MSU. If students feel connected to their university of college—by joining the school's fitness club, for example—it only makes sense that retention might occur.

As for academic success, it's been stated before that exercise can improve learning by helping students study better for a test and decreasing anxiety.