Zach Braff Clears Some Things Up About His Latest Movie, Wish I Was Here 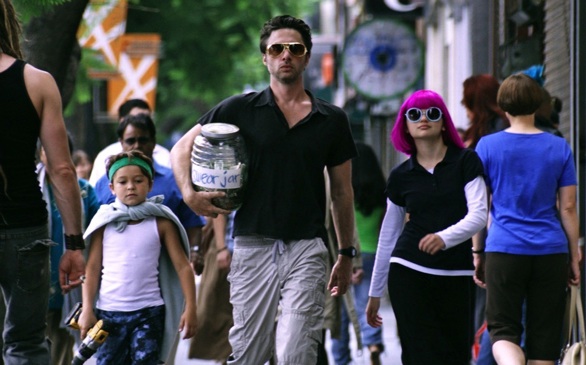 Zach Braff is in the director’s chair once again for his film Wish I Was Here.

Described as a funny, touching story of what it means to be at a major crossroads as a parent, spouse or child, the film stars Braff, Kate Hudson, Mandy Patinkin, Josh Gad, Joey King, Peirce Gagnon, Donald Faison, Ashley Green, Jim Parson and Michael Weston.

In a recent phone interview with Campus Circle, Braff talked more about his filmmaking process, the cast and the differences between Wish I Was Here and his 2004 hit, Garden State.

Campus Circle: I’ve read that Wish I Was Here was the next chapter of Garden State—is that true?
Zach Braff: I want to clarify that, because I don’t want to mislead anyone into thinking this is the continuation of characters—it really isn’t. [Wish I Was Here] has nothing to do with the characters or story in Garden State. I think what I was trying to say is that it’s totally my style; it’s my style of film, with comedy and drama mixed together. I would say whereas Garden State was about someone being rescued by romantic love, this one is about someone being rescued by someone you love. It’s about family, rallying together in a crisis…

Can you describe the casting process for this film?
Because I was the ultimate boss on this, we didn’t have a studio…and because of the way it was crowdfunded, it was all up to me. So, I was able to cast all of my favorite actors.

Mandy Patinkin, I think, is one of the finest actors there is, from “Homeland” to back to The Princess Bride and in between—I love him, and I think he’s extraordinary.

Kate Hudson, I just fell in love with her in Almost Famous. When I saw Almost Famous, I was blown away, because most of the time people who are that pretty aren’t necessarily the greatest actors or actresses. And Kate had so much success in romantic comedies because she’s very funny, but I really wanted to see her do something dramatic, back to what I loved in Almost Famous…

And Joey King, she was China Girl to my monkey in Oz, so we became really good buddies, and I was like a big brother to her on that movie…Joey and I going in had such a close relationship.

You wrote the script with your brother, correct?
Yes.

What was that process like? Do you tend to butt heads or is it any easy collaboration?
We were definitely on the same page about what movie we wanted to make, the tone of it, and we can make each other laugh. We both crack each other up. We both have strong suits, and they don’t always overlap—we complement each other in a nice way. He’s really good at things that I’m not good at…Yeah, we sometimes debate or argue over certain points, but I get to win because I’m the director. When screenwriters are writing something and they bring it to the director, the director gets to say, “I want it this way.” So, I got to win because I was the director (laughs).

What’s the biggest challenge you face when you’re writing, directing and starring in a film?
There’s so much stress on a set when you’re directing…to turn all that off—like turning the volume down on your stereo, so you can be in the scene and perform—that’s the biggest challenge…you have to be present. You have to be in the moment. You can’t have your mind thinking, “Oh my god, are we going to go over time? It’s going to cost a lot of money, and everyone’s going to be mad at me.” You have to turn off your director’s hat and just be an actor.

For your character (Aidan), how were you able to relate to him or draw inspiration so you can portray him as accurately as possible?
I think the film is about a search for self and a search for spirituality in 2014, and I can relate to that, not really responding to the religion my parents were into and fed to me as a child…I don’t have any kids yet, but when I do, what am I going to teach my kids? Organized religion and faith are something I respond to—what is my spirituality? What is my belief? How did we get here on this planet? So, all the things we wrote about in the film are things that I even question myself.

Do you see yourself doing another film that’s not necessarily a follow up, but perhaps exploring an issue that people in their 40s might experience?
No, I don’t want people to think I’m going to write generational films. I just write what I know… I write what I know, what I’m feeling—that’s what worked for me in the past, so that’s what I’m going to keep doing. I’ll write about what I’m thinking about, but I’m not going to try to write a movie about every generation.

It was nice to see that Donald Faison (aka Dr. Turk from “Scrubs”) made a cameo in Wish I Was Here. What was that reunion like?
I just love Donald. He’s one of my best friends in the world. We’ve talked about maybe doing something, another project together, a movie or something. There weren’t so many roles suited for Donald in this film, so he came and did a small cameo. It was fun! We joke around so much. The DVD will have a zillion outtakes of me and Donald joking around like old times. All of it was completely irrelevant to the movie (laughs), but there’s going to be a lot of good stuff on the DVD of me and Donald messing around.