Land Ho!? It All Began with an Icelandic Travel Brochure 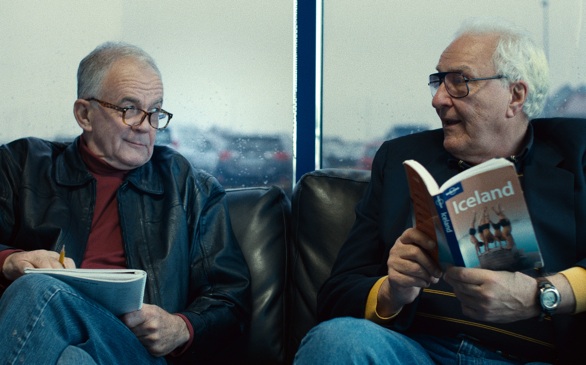 The quirky senior buddy comedy Land Ho! may be the first movie inspired by a vacation brochure and a very outrageous doctor.

Independent filmmaker Martha Stephens was planning a vacation trip with her husband to Iceland last year but her thoughts kept returning to her larger-than-life Southern cousin, Dr. Earl Lynn Nelson.

"I was looking at this location and I was like, 'Imagine Earl Lynn there,'" said Stephens, 30.

The 72-year-old eye surgeon, who loves a good party and his tequila, proved to be a natural screen presence in small parts in Stephens' earlier films Passenger Pigeons and Pilgrim Song.

It was a good friend of Stephens, director David Gordon Green (Pineapple Express), who told her she needed to put the Kentucky native — who looks and sounds like the late singer-actor Phil Harris — in a leading role in a movie

So Stephens called indie filmmaker Aaron Katz (Quiet City), whom she has known since they attended film school at the University of North Carolina School of the Arts, to see whether he would like to collaborate with her on a film set in the sparsely populated Nordic island and featuring Nelson.

"When I talked to Aaron about making the movie together, we tossed around ideas," said Stephens, including a father and son scenario. "We decided it would be about these two guys who had a history, but things had separated them, just to add a little bit more weight to the relationship."

They wrote Land Ho! throughout the winter of 2013 — Stephens lives in West Virginia and Katz, 32, in Los Angeles. Most of the film was shot in just 16 days in September and October in Iceland's capital, Reykjavik, and various locations in the beautiful, wild countryside just before the harsh winter hit the island.

And just a year after Stephens came up with the basic concept, the film premiered in Sundance in January and opens theatrically Friday. Green is one of the executive producers.

The filmmakers needed the right actor to complement Nelson's grandiose personality (both on-screen and off). They both had admired the performance of Paul Eenhoorn, 65, an Australian-born, Seattle-based theater actor, in the 2013 indie This Is Martin Bonner. They thought his more restrained persona "would be a perfect balance" for Nelson, said Katz. "Throughout the film, they really do balance each other."

Land Ho! finds Nelson playing the divorced Mitch, a relentlessly enthusiastic, often profane retired eye doctor who invites his former brother-in-law, Colin (Eenhoorn), to go on a trip to Iceland. Colin, a reserved Australian who is still smarting from a recent divorce from his second wife, reluctantly agrees. During their travels, this oddest of couples meet women, squabble, drink and smoke pot — a lot.

The actors' real-life selves aren't far removed from their reel-life alter egos. In fact, spur-of-the-moment adventures are nothing new for Nelson.

Nelson recalled that when he lived in New Orleans, "I used to carry my damn passport every place I went. I would be at a bar there in Bourbon Street and there would be three guys and they'd say, 'Let's go to Mexico.'"

During a recent interview with the directors and their stars at the Beverly Wilshire Hotel, Nelson dominated the conversation while Eenhoorn listened to his co-star with droll amusement — similar to their movie personas.

"I act every day," said Nelson. "I am me in the movie. Paul just kind of helped me out with it."

Eenhoorn and Nelson first met in May 2013, when they shot the opening 10 minutes at Nelson's house in Kentucky. Nelson immediately felt a connection to Eenhoorn. But then he feels an immediate connection to everyone.

"I have never met a stranger," he boomed in the small conference room. "I never have. I liked him right off the bat. I gave him a big hug and a kiss and said, 'By the way, I need to operate on your eyelids."'

Eenhoorn didn't bond quite so quickly.

"I think I bonded like six months later," he said dryly. "You get to appreciate the effort that Earl Lynn put in because it was a physically demanding film. It was a big ask for directors to put someone in that position to carry a co-lead in a film. The longer between shooting and now I get to appreciate how good Earl Lynn is."

The film was a collaborative effort between the stars and the directors. "Every evening, one of them would come to my hotel room and go over the script," recalled Nelson. "And they would write in the margin, 'Here is what we want to get across.'"

Though there was a script, the actors often didn't stick to what was written on the page, which makes their performances very natural, said Stephens.

"The bones were there," said Eenhoorn. "Sometimes, we would start a scene at the wrong end and go backward. It was very free-form."

1 p.m.: In a previous version of this post, the photo caption misidentified Paul Eenhoorn and Earl Lynn Nelson.