Court Rules University of Texas Can Use Affirmative Action in Admissions 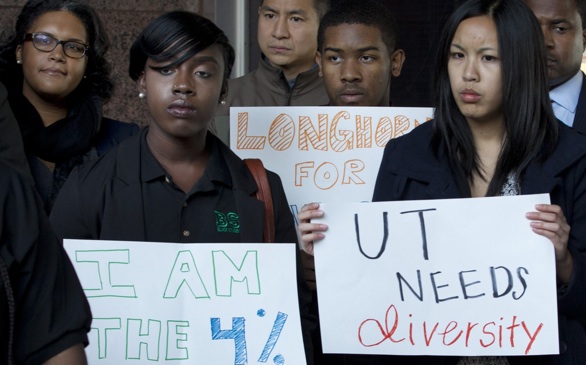 Supporters of the University of Texas in 2013.
(Credit: Jay Janner/Austin American-Statesman/MCT)

It was a victory for affirmative action supporters Tuesday. A federal appeals court upheld the University of Texas at Austin's use of race in undergraduate admissions, reports Reuters.

According to the Los Angeles Times, Judge Patrick Higginbotham said, "To deny UT Austin its limited use of race in its search for holistic diversity would hobble the richness of the educational experience."

He also wrote, "Universities may use race as part of a holistic admissions program where it cannot otherwise achieve diversity."

A panel of the 5th U.S. Circuit Court of Appeals voted 2-1 that the university was justified in its use of race to achieve diversity. However, opponents believe otherwise.

Abigail Fisher, a white woman, grabbed headlines in 2008 when she accused UT of Austin of denying her admission into the school in favor of "lesser-qualified minorities." She claimed the university violated her 14th Amendment rights.

The Times reports Fisher's lawyer said they will appeal the court's decision.