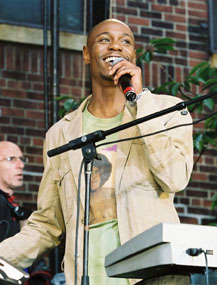 Untitled Document In a business where people sell their souls – and integrity – for $20 million paychecks, there’s only one possible explanation when someone walks away from $50 million.

At least that’s what America thought when comedian Dave Chappelle walked away from his $50 million Comedy Central contract and went off on a spiritual retreat to South Africa last year. Rumors swirled about the runaway comic, and Chappelle himself even poked fun of his so-called fragile state when he returned to the stage during TBS and HBO’s "The Comedy Festival" in Las Vegas last November.

"In case you haven’t heard about me, I’m insane," he tells the crowd during his sold-out performance inside Caesars Palace. "Don’t think you can walk away from $50 million and your wife will be cool with it."

All joking aside, it wasn’t until recently that Chappelle opened up and seriously discussed his state of mind.

"I’m going through some real tough times, some nitty-gritty stuff," Chappelle told host James Lipton during "Inside the Actors Studio" on Feb. 12. "When you go through things like this, it helps to put it all in perspective. I’m famous today. People like me today, but they might not like me tomorrow. You can’t count on it. The world can’t tell you who you are. You’ve got to figure out who you are and be there, for better or worse."

However, it was his Feb. 3 appearance on "The Oprah Winfrey Show" – his first TV appearance since his African retreat – when Chappelle finally came clean about the events leading up to his decision to walk away from his Emmy nominated series, "Chappelle’s Show." The comic confided in the talk show queen and discussed how he "would go to work on the show and felt awful every day ... like some kind of prostitute or something." Chappelle then surprised his millions of loyal fans by stating the unthinkable.

And that’s just what Chappelle did with his new movie, Dave Chappelle’s Block Party. Filmed on location in 2004, the film features Chappelle giving back to a local Brooklyn community by throwing a free block party – and having just as much fun as the guests there. The feature showcases Chappelle at a much happier time in his life, right when "Chappelle’s Show" was all anyone could talk about – and not because its star was missing from the set.

Of course, at the time the movie was being shot, no one could have predicted people would be flocking to theaters to see it simply for the chance to see Chappelle perform all-new material. Instead, it was the impressive lineup of performers the comic booked for the block party that the studio thought would translate into box office dollars.

Kanye West, Mos Def, Erykah Badu, Jill Scott, the Roots and Big Daddy Kane are just a few of the acts Chappelle managed to recruit for the block party. Even more impressive is the fact that Chappelle managed to reunite the Fugees for the first time in more than seven years to perform two of the group’s biggest hits, "Nappy Heads" and "Killing Me Softly With His Song." Talk about power.

But while the film is hyped as the concert Dave Chappelle’s "always wanted to see," at a closer look it really demonstrates what the 32-year-old was preaching about on "Oprah." Completely funded by Chappelle’s own money, the block party was a chance for Chappelle to give back to the community. The Ohio resident offered free tickets to the concert to several dozen people in his hometown and even provided transportation to Brooklyn and lodging. Among those who attended the free block party was Ohio’s Central State University marching band, which helped kickoff the festivities by performing "Jesus Walks" with Kanye West, John Legend and Common.

Chappelle is hoping to give back with "Chappelle’s Show" in a similar way. During his recent interview with Winfrey, Chappelle discussed how he wants to give half the revenue from his DVD sales (seasons one and two of "Chappelle’s Show" are ranked as two of the all-time top-selling TV-to-DVD releases) to charity.

"So even if I say something socially irresponsible," Chappelle stated, "[some proceeds would go] to a socially responsible cause."

Although Chappelle and Comedy Central have yet to come to terms on a new deal that would make both parties happy, Comedy Central has announced plans to air the never-before-seen third season episodes of "Chappelle’s Show" later this year so that fans can see exactly what Chappelle was working on before leaving the hit series. Fans can also rest knowing that no matter what the future of "Chappelle’s Show" is beyond the few season three episodes in the can, it doesn’t look like Dave Chappelle’s planning to leave the public eye for good. The longtime standup comic (Chappelle got his start in Washington, D.C. when he was only a teenager) insists that performing standup is still where his heart is, and it doesn’t sound like he’s planning on leaving the spotlight anytime soon.

"When I’m on stage, I get real happy there," he says. "Maybe that’s the only time in my adult life I feel like myself."

"I like that particular kind of attention," Chappelle elaborates during an interview with The Cincinnati Enquirer. "People don’t know what it’s like standing up there on stage, when you have a wall of people smiling at you. Most people don’t know what it’s like to stand up there and speak their mind. I have a venue to do that. I get paid to do that. It’s not like I’m doing heavy lifting up there. It’s not like I’m solving the world’s problems. It’s like I’m hanging out with a bunch of people and it’s cool."

So whether it’s the small screen, the silver screen or the stage, odds are America hasn’t seen the last of Dave Chappelle. And if the 4,148 people who attended his late-night Vegas performance are any indication, fans are anxious for the funnyman’s return wherever it may be – and Dave Chappelle’s Block Party should benefit at the box office because of it.