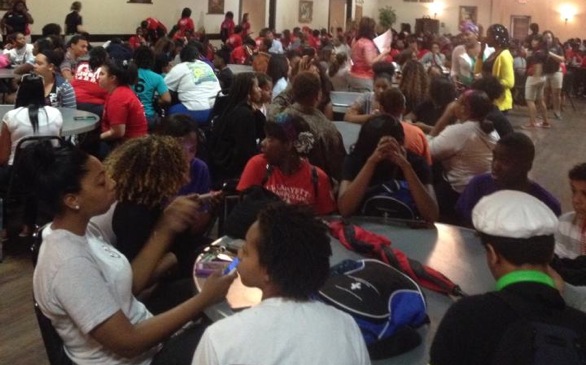 Students in the UL's Upward Bound Program on lock down.
(Credit: Facebook/UL-Lafayette-Upward-Bound)

Two suspicious packages found near the University of Louisiana at Lafayette Wednesday prompted a campus-wide lockdown as bomb technicians work to neutralize the devices, reports the Associated Press.

According to the AP, classes and activities were cancelled for the day, and the campus was evacuated.

A news director at KATC-TV told the AP that the station received a call early Wednesday morning. The caller claimed a bomb had been placed in a trash can at the park and another one was on the university campus. The station notified the police.

An University of Louisiana spokesperson stated that about 5,500 students are enrolled in summer school, and 400 incoming freshmen were scheduled to start orientation on Wednesday.

On Facebook and Twitter, the university posted photos of student residents watching movies and playing games while on lockdown.

Get the latest news on this story by clicking here.