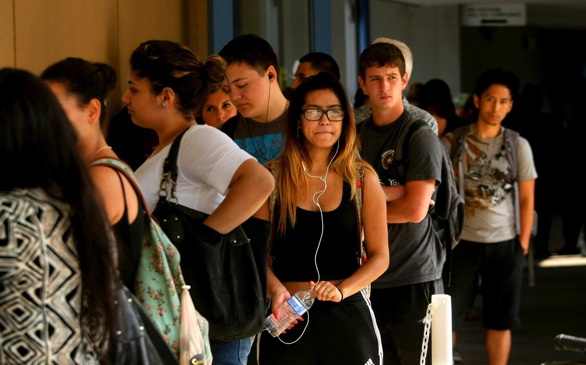 “Without access to affordable student loans, students who cannot afford school after available grants and scholarships are left between a rock and a hard place,” a report from The Institute for College Access and Success states. “They might borrow through other channels, such as private education loans or credit cards, which are more expensive, riskier, and lack the repayment options and protections of federal student loans. Alternatively, they might work longer hours to pay the bills or cut back on the number of classes they take each term – choices that research has consistently found to reduce students’ chances of completing a degree or certificate.”

College completion is a huge issue for community colleges, as well as for four-year institutions, but NPR reports that the problem and reason why many community colleges don't participate in the federal loan program has to do with student loan default rates.

"Over 1 out of every 5 of our students defaults on a federal student loan within 3 years of entering repayment," the Senior Vice President of the American Association of Community Colleges told NPR.

According to him, colleges with a default rate of 30 percent or higher for three consecutive years can be banned from receiving federal aid of any kind whatsoever, including grants. Thus, many colleges decide to not participate in the federal loan program while still receiving funds to help pay for Pell grants, work-study programs and scholarships.

"We strongly believe that the penalty of losing the Pell eligibility for nonpayment of loans doesn’t make much sense, and we wish that policy would be changed,” he said. “The threat of that loss is tremendous, and it’s a very serious concern for colleges.

However, not participating in the federal loan program does have a profound effect on community college students, specifically low-income minorities. African-American, Latino and Native American students are reportedly more likely to attend the community colleges that don't offer federal loan access than white students.

*Nicole Sazegar contributed to this story.