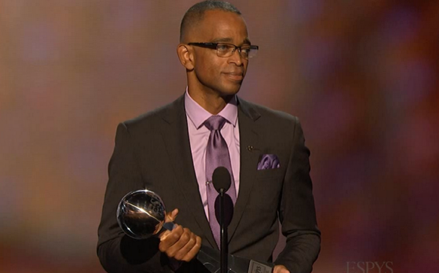 Stuart Scott's speech will go down in the books.
(Credit: Facebook/ESPN)

Ahh, the ESPYs: the big awards show that's dedicated to recognizing the sports industry's standout athletes of the past year.

Although the ESPYs is about the sports and their players, it would be pretty boring to just sit there and watch a bunch of people walk on stage and grab their awards. So, like the Oscars, Golden Globes and other shows, the 2014 ESPYs that aired Wednesday night had plenty of skits and jokes, along with a couple of memorable speeches.

Here are a few moments that grabbed headlines:

1. Michael Sam's Acceptance Speech Induces Tears
St. Louis Rams defensive end Michael Sam has been a hero in the professional and collegiate sports world ever since he came out earlier this year, becoming the first openly gay player to be drafted to an NFL team.

During his acceptance speech after winning the Arthur Ashe Courage Award, the tears were flowing as he talked about love, respect and being true to oneself. "My responsibility at this moment in history," he said, "is to stand up for everybody out there who wants nothing more than to be themselves openly."

He then told audiences about a talk he had with a young woman who feared she wouldn't be accepted if she came out as a lesbian and thus contemplated suicide. This is where he almost broke down, clearly overcome with emotion. Sam's openness and tears prompted a loud applause from the audience.

The football player's powerful message and story will, hopefully, resonate with anyone who's afraid of not being themselves. "To anyone out there, especially young people feeling like you don’t fit in, or are not accepted, great things can happen when you have the courage to be yourself,” he said.

In his acceptance speech, Scott declared he would never give up in his fight with cancer. "You beat cancer by how you live, while you live and the manner in which you live," he said.

Perhaps the most touching moment in his speech was when he talked about his daughters, Taelor and Sydni. "I can't ever give up because I can't leave my daughters," he said. "I love you girls more than I will ever be able to express. You are my heartbeat. I am standing on this stage tonight because of you." Then, Sydni came up on stage and gave her dad a hug.

Grab a tissue, and watch the amazing speech here.

3. Drake Proves He Can Still Kinda, Maybe Act
As the show's host, rapper Drake kicked off the evening with an opening monologue that had some hits and misses.

For those of us who used to watch the teenage soap opera-like drama "Degrassi: The Next Generation," we remember falling in love with Drake as he portrayed the lovable Jimmy Brooks (and also went by his real name, Aubrey Graham). And to be honest, his acting was quite good—you know, for a dramatic teen show or whatever.

But when Drake hosted the ESPYs, we couldn't help but notice that his comedic skills weren't that impressive. Some of his jokes were stale and only received a few giggles from the audience.

However, the rapper did unload some jabs that had audiences cracking up, like bringing up the Richard Sherman Super Bowl media explosion ("Richard Sherman pissed off more white people this year than a crowded parking lot at Whole Foods!") and blowing in Lance Stephenson's ear, which is what Stephenson oddly did to LeBron James during the NBA Finals.

But, it was Drake's skit with Los Angeles Clippers star Blake Griffin that was the most entertaining.

In "Drake vs Blake," the rapper and basketball player threw jabs at each other, with Drake claiming Cheetos contributed to Griffin's skin color. Griffin shot back by enlisting the help of Drake's former nemesis, Chris Brown, who appeared in medical scrubs to perform a surgery on the rapper, much to Drake's horror (by the way, Brown's appearance confirms the assumptions that he and Drake are pretty much cool again).

Overall, Drake didn't do that bad of a job hosting the ESPYs. But although we can all agree that Degrassi Drake is deeply missed, it's perhaps best that Rapper Drake sticks to the whole music business thing.

And when Macklemore sent a "cheap," "ingenuine" text to Lamar (Macklemore wrote he believed Lamar got robbed at the Grammy's) and then posted that text on social media for everyone to see, Drake voiced his disdain to Rolling Stone.

So, obviously, the ESPYs was the perfect time for the rapper to throw a dig at Macklemore.

Can't wait to see how this blow ups!

5. Manny Pacquiao Channels Frozen's Elsa for "Let it Go"
In case you weren't already sick of "Let it Go," from Disney's Frozen, boxer Manny Pacquiao treated everyone to his version of the hit song.

Pacquiao's skit featured him trying to make a studio album. To mix things up, he chose to sing the most overplayed Disney song ever, belting it out as if "tone deaf" and "pitch" weren't in his dictionary.

However, as painful as it was to listen to, it was still pretty funny. For example, Pacquiao tried to explain the song as being a "metaphor," where the world is "so cold" but "still so happy." And when he was asked if he was worried about Floyd Mayweather, Pacquiao responded with, "It's warmer in July, so I'm not that worried about the May-weater."

Seriously, we need more athletes-turned-actors in our lives.

BONUS MOMENT: Drake sang a rendition of "Let it Go" as Pacquiao. Hilarious.