Dodgers Remain Off Most TVs in L.A. as Dispute Continues 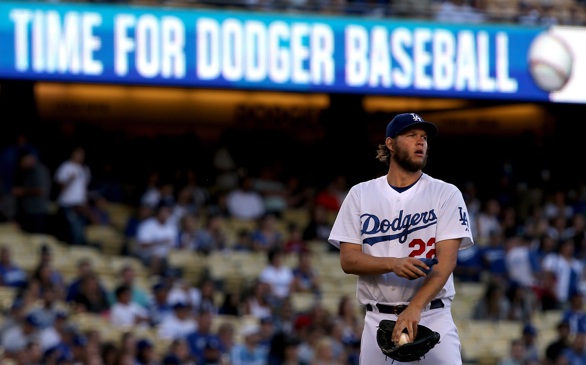 (Los Angeles Times/MCT) The Dodgers are in first place in their division and gunning for a berth in the World Series in October. But as the second half of the season begins Friday, most local fans aren't able to watch any of it on television.

Off the field no progress has been made in the standoff between Time Warner Cable, which is distributing the new Dodgers-owned channel SportsNet LA, and area pay-TV providers including DirecTV, Dish Network, Charter Communications and Cox Communications.

"It is unlikely that we are going to get a deal done," David Rone, president of Time Warner Cable Sports, acknowledged for the first time this week.

Dodgers President Stan Kasten called the situation "extremely troubling" and urged everyone to "return to the table to continue to work to try to make a deal as quickly as possible."

Before the start of the 162-game season, many observers expected that pressure from fans would force the pay-TV providers to the negotiating table, or face mass defections. That's what usually has happened in the past. But not this time.

Instead, Time Warner Cable and the providers are deadlocked in what could become a definitive moment for the world of sports programming, as the industry realizes that exorbitantly priced television deals can backfire.

Executives at DirecTV, Cox and other distributors contend that Time Warner Cable's price for the sports channel is too high and would force them to charge consumers, many of whom are not sports fans, even more for their pay-TV packages. They are equally pessimistic about coming to terms on deals this season.

Time Warner Cable is seeking more than $4 a month per subscriber for SportsNet LA, and the price escalates sharply from there, people familiar with the negotiations said. Though Time Warner Cable declines to comment on its offer, it says the price is not out of line with the value of Dodgers baseball to distributors.

Left in the lurch are millions of Dodgers fans who have been unable to see Clayton Kershaw's masterful pitching performances or Yasiel Puig's reckless abandon on the basepaths. Since opening day, the only games fans have been able to watch are the handful broadcast on ESPN, Fox and Fox's national sports cable channel Fox Sports 1. Only subscribers to Time Warner Cable, which has about 30% of the Los Angeles pay-TV market, are seeing games regularly.

"It's driving me crazy," said Bill Sanders, a Malibu resident who is a DirecTV subscriber. "Kershaw throws a no-hitter and I can't watch it with my son." Sanders lives in an area where he could switch to Time Warner Cable but he doesn't want to drop DirecTV or add a second pay-TV service just for SportsNet LA.

"People understand what's going on," said Dan York, chief content officer for DirecTV. He declined to say how many subscribers DirecTV had lost, but a person with knowledge of the matter said that it was fewer than 2,000 of the more than 1.2 million households the company serves in the Los Angeles market.

DirecTV and other TV providers say consumers know that a Dodgers TV deal would mean significantly higher monthly bills — requiring subscribers to fork over around $50 a year more even if they are not baseball fans.

The prospect of higher bills to watch the Dodgers on TV was widely predicted in 2011, when Guggenheim Baseball Management bid a record $2.15 billion for the team and TV rights were seen as the avenue in which they would pay back the loans used to finance the acquisition.

Time Warner Cable landed distribution rights for SportsNet LA last year after a heated bidding war with Fox's Prime Ticket, which had been carrying the bulk of Dodgers games.

Tired of playing second fiddle to Fox, Time Warner Cable agreed to a massive $8.35-billion, 25-year deal to run the network, according to a valuation by the Dodgers and Major League Baseball. That topped the Fox bid by $2 billion. A year earlier, Time Warner Cable won rights to the Lakers, which had been on Fox Sports West, with an over-the-top $3-billion, 20-year deal.

The annual fee that Time Warner Cable agreed to pay to the Dodgers started at $210 million this season, or $1.5 million per game, and increases through the life of the contract. That is more than four times what the Dodgers got last season from Prime Ticket and CBS-owned KCAL-TV Channel 9, which aired 49 games last season.

Those fees are the reason Time Warner Cable wants so much for SportsNet LA. Last season, Prime Ticket charged about $3 per month, per subscriber, according to industry consulting firm SNL Kagan.

Rone contends that DirecTV is refusing to engage in serious negotiations. "These guys have shown no sense of urgency to get a deal done. It is so unfair, Dodger fans are waiting to see a first-place team." Rone also said the cost for Prime Ticket was based on the decade-old deal it had with the Dodgers and has no relevancy to the current situation.

The rising costs to carry sports programming has distributors in a bind. On the one hand, sports is incredibly valuable content — Chris Bevilacqua, a top sports TV deal-maker described it as "the glue holding the pay-TV system together."

On the other hand, the cost to carry regional sports networks and national services such as ESPN and Fox Sports 1 is getting so high distributors fear their customers who aren't sports fanatics will cut the cord to their subscription.

"It's like a giant greedy monster that is incredibly difficult to stop," said Jimmy Schaeffler, who heads the Carmel Group, an industry consulting firm.

Distributors have said they are willing to carry SportsNet LA on a specialty tier along with other more expensive channels or even offer it on an individual or a la carte basis.

"We only want to charge the sports fans who want to see the team," said Andy Albert, senior vice president of content acquisition for Cox Communications. "To burden all of our customers with the high cost of this network is not what the majority of our subscribers want."

Time Warner Cable wants SportsNet LA to be mandatory for all pay-TV subscribers, which is how regional sports networks have been traditionally sold including those owned by DirecTV. By being in every home, a network has a greater opportunity for higher ratings and ad revenue than when it is in limited distribution.

"They disseminate and distribute their networks in the exact same fashion we are asking," Rone said of DirecTV.

Landing DirecTV is key for Time Warner Cable and the Dodgers. Not only does DirecTV have about 30% of the pay-TV market here, it competes head-to-head with everyone else. Because DirecTV has played hardball with Time Warner Cable it has given the other distributors cover to draw a line in the sand as well.

"Experience tells us you need to get the big boy to fall," said Rone, adding that the others are "following DirecTV's lead."

Another huge stumbling block for distributors: The Dodgers were insistent on owning their own channel rather than airing the games on an existing outlet. A few years ago, the market just had the two Fox-owned sports outlets.

Now there is also SportsNet, SportsNet LA, the Spanish-language channel Deportes and two Pac-12 Conference networks. The amount of sports on television here hasn't increased much, just the number of channels carrying games and the price to watch them.

Another factor complicating negotiations is that DirecTV and Time Warner Cable are in the process of being acquired by AT&T and Comcast, respectively. Some industry observers think if Time Warner Cable still doesn't have distribution pacts in place by the time its sale closes, Comcast will take a write-down on the Dodgers contract and lower the distribution fee.

Cox's Albert thinks what's happening in Los Angeles may prove to be a tipping point for sports on television.

"The sports model is broken right now," he said. "I don't have an answer but certainly increasing the costs is not the way to run a business."

Major League Baseball is also frustrated about the situation and has been unsuccessful in its efforts to encourage all the parties to come to terms.

But there is nothing Selig can do to break the logjam. "This is a problem they have to work out," he said.