Let Me Take a Seflie...for a Cause: Aim to Get More Than Just 'Likes' 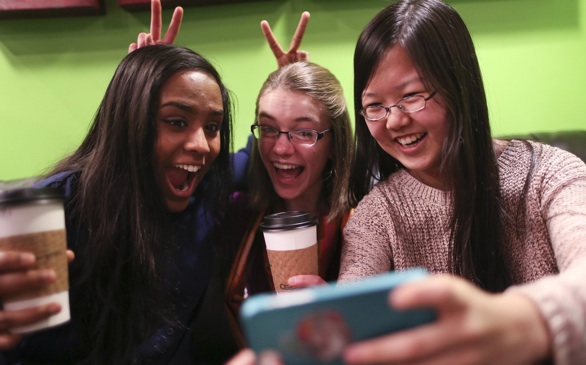 Have you taken a selfie lately? Chances are you have at least 200 selfies that you just took five minutes ago, because you had to show everyone how you “woke up like this #flawless” on Instagram and Twitter.

Although we tend to roll our eyes, write ranting blog posts and complain about those vain people who love to take a million selfies and flood our social media channels (and viral songs such as the Chainsmokers' "#Selfie" surely adds to our annoyance), we can't ignore those who recognize how important these seemingly narcissistic photos can be.

However, these people are not posting selfies for confidence boosts or "likes;" they're posting them to make a change in the world.

I’m sure by now you have seen Rebecca Brown’s viral video, in which she uses selfies she took every day for the past 6.5 years or so to document her struggles with trichotillomania (obsessive hair pulling) and dermotillomania (obsessive skin picking). In doing this, she brings awareness to these diseases and offers support to others who are suffering from them.

However, Brown is not the only one using selfies for a greater good. Here are other causes that have used selfies to bring awareness and gain support:

1. #SelfiesforReform: FWD.us launched a campaign back in May, inviting people to take a selfie on their apps in support of immigration reform (the hashtag was #SelfiesforReform). They also ask that people write to Congress, telling the politicians why they support the reform. FWD.us will send Congress members a postcard with people's selfies and what they wrote. Jared Leto, Adrian Grenier and Gov. Jerry Brown are some of the celebs who support this cause..

2. #NoMakeUpSelfie: Does this hashtag seem to be blowing up your Instagram feeds? Well, there is actually a great reason for that. It is a trend that started in support of actress Kim Novak after her looks were scrutinized at this year’s Oscars, but soon got hijacked by Cancer Research U.K. in order to raise money for cancer research. In just 48 hours, it raised about £2 million ($3.3 million) in just 48 hours.

3. Ellen's Oscar Selfie: Talking about the Oscars, remember that record-breaking selfie Ellen DeGeneres and other celebrities took? You might be surprised to learn that wasn’t just to break a record. Samsung (the sponsor) opted to donate a $1 for each retweet the picture got. This resulted in St. Jude Children’s Research Hospital and the Human Society of the United States getting a donation of $1.5 million each.

4. #UnselfishSelfie: Last summer, DoSomething.org launched the #UnselfishSelfie campaign in order to raise $25,000 for charities nominated for their awards show, which aired on VH1 and Sophia Bush hosted. The directions given were to take a selfie of people doing something positive. Some of the suggestions for this included holding the door for someone, smiling at a stranger and volunteering at a food pantry. For each picture using the hashtag, Viacommunity donated $1 towards the goal.

5. #SelflessSelfie: A similar hashtag was used for another cause. #SelflessSelfie was used to raise money for relief work in the Philippines after Typhoon Haiyan struck the country. ActionAid in the U.K. launched the campaign and asked people to purchase a Selfless Selfie T-shirt (£20) and wear it in a picture they could later share through social media.

So, the next time you take a selfie, why not consider using it for a greater good, or join a cause like the ones mentioned above? That way, those five minutes spent taking 200-plus selfies won’t feel like wasted time.