Sex Tape, Purge and Planes take on Planet of the Apes 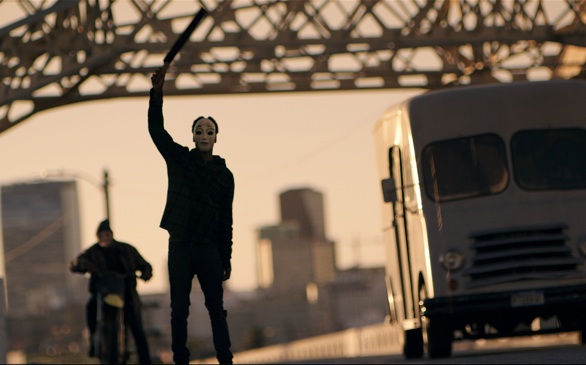 LOS ANGELES — A raunchy rom-com, an anarchy thriller and an animated action-comedy with planes will all try to take down “Dawn of the Planet of the Apes” at the box office this weekend.

The latest entry in the “Planet of the Apes” franchise is expected to gross about $30 million in its second weekend in the U.S. and Canada after a successful $73 million opening weekend.

The 20th Century Fox film will face stiff competition from the sequel “The Purge: Anarchy” and the R-rated romantic comedy “Sex Tape,” which could each bring in about $30 million through Sunday as they open in the U.S. and Canada. Disney’s animated film “Planes: Fire & Rescue” is poised to take flight with $20 million or more in ticket sales.

That means there could be a three-way race for No. 1, according to people who have seen prerelease audience surveys. It will be no surprise if the “Planet of the Apes” film is victorious in its second weekend.

“The Purge: Anarchy,” released by Universal Pictures, is a follow-up to last summer’s “The Purge,” a thriller that takes place on one night when all crime is legal.

The sequel, which cost about $9 million to make, follows several people (played by Frank Grillo, Zoe Soul, Zach Gilford, Kiele Sanchez and Carmen Ejogo) as they try to survive the 12 hours of anarchy on the streets of Los Angeles. Audience tracking services indicate the film could gross more than $30 million.

Columbia Pictures’ “Sex Tape,” starring Jason Segel and Cameron Diaz, cost about $40 million to make. It is expected to gross $25 million to $30 million.

The film follows married couple Jay (Segel) and Annie (Diaz), who find themselves trying to get “it” back by making a sex tape. Things get out of hand when the sex tape accidentally goes public.

At the film’s Los Angeles premiere last week, director Jake Kasdan told the Los Angeles Times he hopes the comedy is a “good time for everybody.”

“We used to joke that it was going to lead to a lot of sex and a lot of fights,” Kasdan said.

“Planes: Fire & Rescue,” which cost about $50 million to make, follows a crew of firefighting aircraft (voiced by Dane Cook, Ed Harris, Julie Bowen and Wes Studi) battling a massive wildfire. Its predecessor, 2013’s “Planes,” launched with $22 million on its way to a domestic total of more than $90 million.

“Apes” has had overwhelmingly positive reviews from critics and audiences. The movie’s Rotten Tomatoes “freshness” score stood at 91 percent on Thursday.

Although 91 percent of audiences said on Rotten Tomatoes that they wanted to see “The Purge: Anarchy,” its standing “tomatometer” rating was at 50 percent as of Thursday, while “Planes: Fire & Rescue” was at 44 percent and “Sex Tape” was at 19 percent.