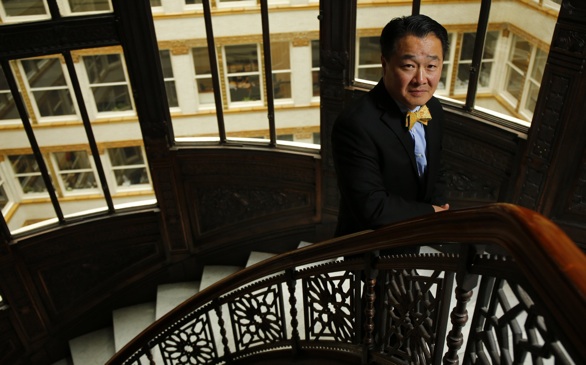 Some have called his decision “idiotic.”

“Whether they think I am an idiot or they think I’m incredibly smart for finding that decision, that’s irrelevant,” said Ohr, director of the National Labor Relations Board’s Chicago regional office. He added, “I don’t want to clog things up with my personal opinion about things.”

The historic ruling led to an April vote by Northwestern’s football players on whether they want a union to represent them. The NLRB is keeping the ballots under seal until its five-member board in Washington makes a final ruling on an appeal by the university. The timing of that decision is uncertain.

Meanwhile, response to Ohr’s decision has been swift. For example, Ohio passed legislation saying college athletes are not public employees. And Republican lawmakers from Minnesota, Tennessee, North Carolina and Georgia this month asked the NLRB to reverse Ohr’s ruling.

Ohr said he knew his decision would be controversial, “but looking at the facts and the law, it was not a difficult decision.” He declined to elaborate.

Ohr, 46, who became the NLRB’s Chicago-based regional director in 2011, learned the importance of remaining unemotional and not responding to criticism early in his career.

To resist the temptation to respond and to ground himself, Ohr said he folds his hand into a fist and digs his nails into his palm.

“In the heat of the moment it is hard to figure out what’s the right thing to do,” he said.

When Ohr started with the NLRB in 1997, he was advised not to lash back. Ohr, hired as an attorney at the agency’s office in Honolulu, fresh out of Pepperdine University School of Law in California, recalled walking into his supervisor’s office, upset about a letter from a powerful politician who accused him of being biased. His supervisor told him not to give in to knee-jerk reactions.

“Easy for you to say,” Ohr recalled thinking. But he calmed down and has followed that advice ever since.

Thomas Cestare, officer in charge of the NLRB’s Honolulu office, said he remembers interviewing Ohr, whom he described as soft-spoken and mild-mannered with an ability to poke fun at himself.

Ohr’s most memorable case from those years involved a garment factory in American Samoa. Seamstresses from Vietnam and China paid the factory owner $3,600 to $8,000 for jobs, according to court documents. Once the women arrived, they were crammed into rooms in the compound.

After workers complained that they weren’t paid, the owner threatened them with deportation, refused to provide them food and barred them from leaving. Some sneaked out to get help. In 1999, the Department of Labor and the NLRB opened investigations.

Ohr said he spent a week in Samoa interviewing the seamstresses. Some told him their families had mortgaged farms to send them to Samoa, hoping they would send money home.

A Federal Bureau of Investigation probe resulted in the factory owner in 2005 being sentenced to 40 years in prison for holding more than 200 people in forced servitude.

Ohr called the case “incredibly bittersweet” because the abuse continued and some seamstresses were beaten in the months after his investigation. He said federal labor law is often criticized for its lack of remedies to protect workers. In this case, Ohr said he wished he could have done more.

In 2006, Ohr was promoted to deputy assistant general counsel of the NLRB’s division of operations-management in Washington, D.C.

While in that position he forged relationships with immigration agencies, hoping to convince the agencies to put a hold on deportations to keep people in the U.S. during investigations. Once people are deported, their cases are more difficult to investigate. (Federal labor law protects workers regardless of their immigration status.)

Anne Purcell, the NLRB’s associate general counsel, said Ohr has “a natural compassion for the population that we protect.”

Ohr said protecting employees’ voices and giving them an opportunity to be heard is the path to ensuring basic human rights.

“The NLRB has the duty to protect that voice,” Ohr said.

Ohr’s interest in becoming a lawyer began in his early 20s, when he worked at a bank. He was named to a jury in a trial about a car deal that had gone bad. “Not exciting,” he said. Until then he had thought of lawyers as superhero characters as portrayed on television. Seeing them in action during the trial made him realize they were just people. “I can do something like that,” he recalled thinking.

Afterward, he researched how to apply to law school.

Ohr’s 2011 promotion to regional director brought him back to the Chicago area, his childhood home.

After coming to the U.S. from Korea in the early 1970s, Ohr’s parents settled in Idaho then moved to Illinois. Ohr said he mostly grew up in Norridge and Albany Park, a Chicago neighborhood then peppered with empty storefronts and gangs. His family was part of an early wave of Korean immigrants who later flocked to the neighborhood.

Ohr said he fell behind in classes because of the constant moving. He transferred schools eight times between first and fifth grades, which made it difficult for him to learn English and make friends. Often the only Asian child in his classes, he said he was bullied.

He recalls walking home one winter day in second grade when two older kids started throwing snowballs at him.

“They were just merciless,” he said.

A crossing guard saw what was happening and protected him. The next day, he was called to the principal’s office along with two boys. The principal asked him if the boys were the same ones who had thrown snowballs at him. “I nodded,” he said. Their punishment was to make snowballs with their bare hands for half an hour.

Ohr’s mother, Sue, said through a translator that her son never complained and usually put on a happy face despite being picked on. Often, she said, he arrived home late school because schoolmates wouldn’t let him on the bus.

To try to prevent the bullying, Ohr’s parents enrolled him and his two siblings in St. Eugene Catholic School. He later attended Notre Dame College Prep.

To pay for the schooling, his father worked 10-hour shifts at a factory, Monday through Saturday and often on Sunday. His mother worked eight-hour shifts, also at a factory. Sometimes she also worked Saturdays. Ohr, the oldest child, was responsible for caring for his siblings.

Ohr said he rebelled as a teenager by doing poorly in school. But he participated in sports such as wrestling and football. By his senior year, the once-unpopular Ohr had become good friends with his teammates.

Ohr said being bullied taught him the importance of speaking out for those who don’t have a voice. Being picked on also drew him to labor law, he said.

Ohr said many immigrant workers don’t know they have rights. Often, they keep silent about mistreatment and their silence is used as evidence that the abuse didn’t occur. He knows from experience that immigrants are fearful of federal agencies and rarely speak out against employers.

“I would like to think that being an immigrant, being of Korean ancestry, growing up poor ... when I see a case, I see it a little bit differently,” Ohr said.

When cases are first investigated, Ohr said, there is a neutral tone to the work that he does. He noted that more than 70 percent of cases are dismissed or withdrawn because of lack of merit, he said. But if the agency finds violations of federal labor law, that neutrality goes out the window, he said.

His goal for the Chicago office is for it to be a member of the Chicago community instead of being perceived as an unreachable federal agency.

Adam Kader, director of the Arise Chicago worker center, said he was surprised to schedule a meeting directly with Ohr soon after he took the position in Chicago. Since then, Ohr has attended a few events with workers, most of whom are immigrants, shared with them his story and explained how federal law protects them, Kader said.

Ohr also has reached out to employers.

James Franczek, an attorney who represents public and private sector employers, including the city of Chicago, said Ohr is approachable and his community outreach program is “top notch.” He said Ohr takes the time to meet with the law school students his law firm takes to the regional office. “It’s not something a regional director would do, and I give him credit for taking the time and energy to do that,” Franczek said.

Franczek stressed that while he not always agrees with Ohr’s decisions, Ohr deserves “enormous credit” for running the office in a professional, transparent and cooperative way.

“I think he wants the (regional office) to be relevant and current with the times,” said Robert Bruno, a professor of labor and employment relations at the University of Illinois at Chicago. He added that previous regional directors have not been as approachable.

Ohr said the region has seen an increase of unfair labor charges filed on behalf of workers who are not union members. He attributes some of those cases to the work he’s done to reach out to the community to explain that the agency protects all workers in the private sector regardless of whether they are unionized.

“I’m not pro-union or anti-union, but having just a voice, a protected voice, that’s a fundamental right of an individual. That’s a human right for an individual to have that voice; to be able to band together and say, look, this is unfair,” Ohr said.