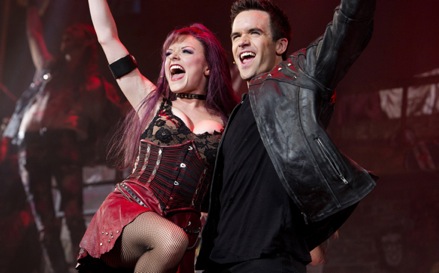 First debuted on London’s West End in 2002, “We Will Rock You” is set in a far, far distant future (300 years from now, to be exact) where people no longer live in reality, but in cyber-reality known as iPlanet. People, called Ga Ga Kids, maintain identical lives, wearing the same clothes, having the same thoughts and, most upsettingly, listening to the same computer-generated, synthetic pop garbage music called Radio Ga Ga. A company called Globosoft —overseen by Killer Queen (Jacqueline B. Arnold), the diva-licious mind behind the entire brainwashing operation—controls them.

Galileo (Brian Justin Crum) is a black sheep in a sea of generic white fluffy ones. He dreams of songs with original lyrics and foresees (forehears perhaps) sounds a computer cannot replicate. Musical instruments are strictly illegal on iPlanet, but there are rumors that one still exists, hidden somewhere in the old world. The seekers of authentic rock music and the lost instrument are known as Bohemians, outcasts of iPlanet and evaders of Killer Queen.

When the Bohemians are introduced to Galileo and his new female companion, whom he names “Scaramouche” (Ruby Lewis), they quickly deem him as their prophet, the one who will find the hidden instrument and introduce them to enlightenment via the ever elusive and strictly prohibited “Bohemian Rhapsody.”

“We Will Rock You” is just about every rock music fan’s dream musical. The mood is light, and the entire production revolves around the songs of none other than the best rock band in history: Queen. It’s a guy’s musical, the kind you could bring your male significant other to, even on a night when there’s an important Dodgers game that would otherwise keep their attention. By the end, they may even thank you for dragging them to the theater, at least just this once.

However, if you yourself are accustomed to Tony Award-winning, or even nominated, musicals and consider yourself somewhat of a theatrical connoisseur, “We Will Rock You” is most certainly not for you. The plot is weak, predictable and, unless I’ve gone mad, completely missing most of the final act. There is also a good 30 or more minutes that could, and should, be taken out completely. Whole scenes are rendered virtually (pun intended) useless except for the songs that we do love to hear, however awkwardly placed. The production is far from highbrow and predominantly relies on large television screens instead of the beautifully handcrafted set pieces we so look forward to admiring in a touring musical.

Despite the fact that I didn’t believe fully in the storyline and wasn’t blown away by the other aesthetics, “We Will Rock You” does one very important thing right—it draws the audience in with music, dancing and foot-thumping straight out the gate. By the time the surprise number not listed in the program comes around, you’ll find yourself wishing they would keep going. Queen, after all, has plenty of material, and you have nowhere else to be but rocked away.