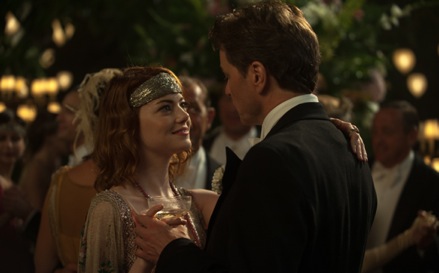 The man with the movie camera is back. With Magic in the Moonlight, Woody Allen continues his romantic comedy habit, using his usual quick wit and dry sarcasm. He may be a bit of a controversial figure in real life, but his latest film eludes any such gossip with just enough cheek and earnest delight to make us ignore the minor blunders and look straight towards the wonder.

The magic in question begins with Wei Ling Soo (Colin Firth), a world-renowned magician and conjurer of the 1920s. Of course, he really is just a stately British man named Stanley who dons a kimono and knows how to use eyeliner, but the audience need not know that. A man of high-class taste and little belief in real magic, when Stanley hears word of a young, unimaginably talented psychic named Sophie Baker (Emma Stone) that seems to be the real deal, his stubborn cynicism of faith urges him to debunk her assuredly outrageous lie. He will travel to the south of France where she is duping the unsuspecting rich families that fall into her money trap and prove what matters to him most: that he is right.

From there on, Allen sets a lusciously colorful stage for his two stars to play on. Firth (The King’s Speech), is his usually overwhelmingly British and slightly stiff self, but Allen’s Stanley allows Firth to bring a little more contempt to his character rather than that boring, gentlemanly nature that he oozes in almost every role.

The real heart of Magic in the Moonlight, however, lies in its leading lady, as with most of Allen’s films. Stone (The Amazing Spider-Man) seems to steadily increase in charm with each project, bringing a bright playfulness to the screen that’s engaging and intriguing. She brings her unique precociousness and spirit to Sophie, and it seems her big blue eyes have been waiting for Allen’s lens to capture them.

All of these players become part of Allen’s time machine, one that takes us back to the whimsy of the ‘20s. While sometimes vignettes become almost too sketch-like, bordering caricature terrain, his knack for capturing the spirit of a time sweeps us in. The music, the imagery and the dreaminess of Allen’s camera all add up to mirror the magic at the center of his writing.

For this reason, Magic in the Moonlight falls in line with his recent whimsical romance films Midnight in Paris (2011) and To Rome with Love (2012), both of which fancy themselves on the object of their setting as the main characters. If Blue Jasmine (2013) weren’t in the way, it could almost be played as a trilogy.

However, we cannot talk about Allen without discussing his script, one wrought with this pairing of unabashed romanticism and deep-rooted pessimism, each one constantly working off one another.

Through Stanley, Allen prompts a discussion on faith of the unknown, which at first refers to the occult’s faculties but then becomes about love, an equally unknowable force and one that Allen has historically obsessed over.

Stanley lives life based on reason and logic, and when Sophie threatens to burst that bubble, with both her supposed gift and her unwavering allure, the commonsensical atheist doesn’t know where to look for an answer. Allen explores this theme without pandering for some universal, obligatory answer and instead allows his characters to frolic through the problem.

Just like his main character, Allen may not know exactly what he believes, but the unknown is explored with such immense style, enough panache and that dash of irony to make you believe anything he says. If that’s not magic, what is?

Enter to win a FREE Magic in the Moonlight poster by clicking here!