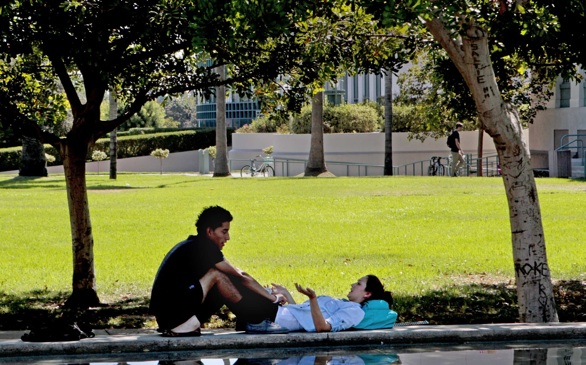 (MCT) Pasadena City College's stature as one of the state's best two-year schools wasn't lost on members of a visiting team of advisors this year. "You've got a great reputation," one member told campus employees.

But that reputation, and maybe even the school's accreditation, was in danger, said Scott Lay, the president of the Community College League of California. Not because the school's finances were in disarray or that academic offerings were suffering, but because faculty and administration couldn't get along.

"You've got to find a way to move forward," he said. Otherwise, "it's going to hurt the students."

Since then, communication appears to have worsened. Some faculty blame President Mark W. Rocha, saying he has ignored the school's policy of consulting faculty on major decisions. Faculty leaders are mulling their third no-confidence vote and some even rooted for him to get a job on the East Coast, where he was a finalist for another position. (Rocha didn't get it.)

Rocha, who makes nearly $250,000 a year, declined to be interviewed but said in an email that his detractors were a small group who "constantly complain to the press about 'governance' and the administration."

Some outside observers and elected officials say there seems to be plenty of blame to go around for the school's troubles.

"What you have is a breakdown of communication that's developed into an untenable situation," said Marshall Lewis, the newly elected student trustee. "It's bad."

Located near the foothills of the San Gabriel Mountains, Pasadena City College has enjoyed its status as one of the state's most successful community colleges. Nearly 30% of students transferred to a college or university within four years, about 5% higher than the state's average, according to the most recent state statistics.

But tension has risen as the college, like many others, has seen funding and class offerings decline because of the recession. Enrollment at the college has fallen from a recent high of nearly 30,000 full-time students in the fall of 2010 to about 26,000 in the fall of 2013, a nearly 13% drop, according to state statistics.

Statewide, the number of students enrolled in community colleges fell by about 10% during the same period.

Some faculty and students have blamed the school's problems on Rocha, who was hired in 2010 after a four-year stint at West Los Angeles College. Before then, he had also worked at Seton Hall University and Argosy University, a for-profit school.

Professors say they were left in the dark about several crucial issues, including scheduling changes, canceling winter semester and opening a campus in Rosemead last year.

"These decisions have been made behind closed doors," said Eduardo Cairo, the president of the Academic Senate. "We keep on telling them that we're open, we're here, let's talk, and they never want to talk."

Under a 1997 agreement, the college administration is supposed to "consult collegially" with the Academic Senate, a practice known as "shared governance."

In an email he sent to other administrators this year, Rocha said he "knew long ago that our 'shared governance' system would not bear the weight of transformative reforms." A campus spokeswoman said Rocha tries to consult with faculty.

Faculty have taken two no-confidence votes in him and conducted an online review of Rocha's leadership that produced scathing results, with most respondents saying he had done a poor job of guiding the school.

"Fascist approach to leadership," one wrote. "Rocha is destroying PCC," another said.

Some students have been equally harsh in their criticism of Rocha and the board, especially after the board agreed to cancel winter sessions two years ago. Without the extra six-week session, students have a harder time earning enough credit to transfer or graduate, said Jordyn Orozco, the president of the school's student body.

Rocha said he would speak with a reporter only if the president of the Board of Trustees, Anthony Fellow, also attended. Fellow is teaching a course in Italy and will not return until the end of the month.

Trustee William Thomson, the former mayor of Pasadena, defended Rocha's accomplishments, saying he had guided the college during a difficult financial time and helped raise nearly $7 million for student scholarships.

"I think he's done a good job in some respects," he said.

The board last year voted to give Rocha a four-year contract extension.

In an email, Rocha offered to supply a reporter with the contacts of "dozens" of faculty who supported him. But Rocha did not answer further emails.

Thomson said the climate on campus has to improve. "People have to work much more effectively together," he said.

The Board of Trustees was heavily criticized this year for inviting Oscar-winning alumnus Dustin Lance Black to deliver the commencement address, then rescinded it over concerns about an illegally obtained sex video featuring the screenwriter. They invited him again and Black spoke.

Thomson also said he thought Rocha was committed to the college but was looking for work on the East Coast to be closer to his wife, an engineer who recently got a job in the New York area. Rocha was a finalist to lead Kingsborough Community College in Brooklyn.

In an email, Rocha said faculty were resistant to change and more interested in being comfortable than offering courses in areas needed for graduation or at times that are convenient for students. "Faculty want to teach the courses they prefer," Rocha said.

In the end, faculty and Rocha seem to agree on one thing: The current situation has to change.