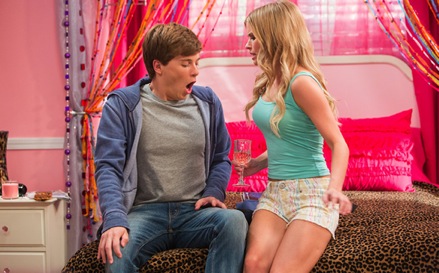 Puberty sucked. With all those hormones fighting to take over your poor pimpled self, it seemed easier to just hide under the Star Wars bed sheets and wait it all out.

Unfortunately, your parents insisted that education was necessary, so you joined all the squeaky teens under one roof in high school, where the pressure to make something of yourself seemed to make the hormones lash out even more.

But hey, if something went terribly wrong, you could always go home and sleep it off. After all, there's always tomorrow, right?

In director Dan Beers’ debut feature Premature, we get to meet the most unfortunate teenager in the universe: Rob (John Karna). He's a go-getter, utilizing every moment of his high school career to prepare for his undoubtedly bright future. All he has to do is get through today, which includes interviewing with an adviser from his dream school and then going to his best friend Danielle’s (Katie Findlay, "The Carrie Diaries") house to watch the National Spelling Bee.

Seems simple enough, until Angela (Carlson Young), the hottest girl in school, invites him over for last-minute “tutoring.” A virgin of the desperate variety, Rob instinctively flakes on his plans with Danielle to pursue manhood. Things seem to be going pretty smoothly—she essentially pounces on him—but as her hands start moving down south, Rob’s body betrays him and he prematurely…you know.

And suddenly, instead of opening his eyes to an embarrassingly sticky scene at Angela’s house, he finds himself in his own bed. On the same day. That morning. As if his interview or Angela never happened.

Yep, it looks like Rob has a bit of a Groundhog Day situation on his hands, except it’s not suicide attempts or passing out drunk that triggers the time loop—it’s Rob premature ejaculation.

Obviously, this is a big shock for the teen. He then relives the same day at high school, trying to get his best friends Danielle and Stanley (Craig Roberts) to help him figure out if he’s mentally ill, deranged, dreaming or whatever else could be possibly wrong with him.

As one can imagine, a string of crazy events ensue, some of which Rob simply has fun with and others that show his desperation to get out of this vicious cycle. From frantically jacking off after insulting the sensitive volleyball jocks, to getting kicked in the balls by the all-star girl basketball player after punching her boob, Rob ought to count his curse of being super sensitive down below as a slight blessing when it comes to the predicaments he gets himself into.

While Beers chose a clever way to spin the success of Groundhog Day, the model ends up flying a bit too close to the sun. Anyone who has scene Bill Murray’s cult hit will be able to instantly predict what Rob is doing wrong. It makes some of his efforts become somewhat redundant and unnecessary as the plot tries to build.

Rob’s cast of friends are also affable and easily relatable. Welsh actor Roberts of Submarine (2010) fame gives the slightly-perverted-best-friend niche a slight upgrade. Findlay as Danielle also adds a light cool to a role that could have been very square.

While it’s hard to say if Premature is ultimately a unique film or simply a spinoff, it brings enough chuckles throughout to amuse a Groundhog Day fan, at least until tomorrow.

Premature releases at Arena Cinema in Los Angeles on July 25, 2014. Join the cast and filmmakers that night at 7:45 p.m. (with special guest host Trevor Moore). There will be a following reception at Sadies!