Blair Underwood: Good at Being Bad in Madea’s Family Reunion 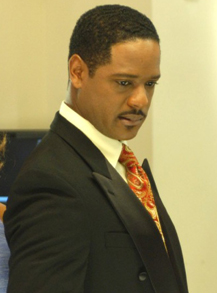 It isn’t easy being suave for a living, but Blair Underwood has made a career out of using his powers for both good and evil.

"When I was doing ‘L.A. Law’ it was really important to me to play very uplifting, positive characters," Underwood recalls. "When that was over, I made a conscious effort to look for roles that were darker and showed a different edge. I went directly from the last day of ‘L.A. Law’ into rehearsals for a movie called Just Cause where I played a serial-killing pedophile."

Underwood plays a different kind of villain in Tyler Perry’s Madea’s Family Reunion, the follow-up to Perry’s surprise blockbuster Diary of a Mad Black Woman. Underwood is Carlos, an upwardly mobile sophisticate in public, but an abusive fiance behind closed doors.

"You have to really straddle the fence," says Underwood of tackling the complicated character. "Definitely, you don’t want to be a caricature. I hope to never play a caricature and that’s the challenge – what are the subtleties and nuances in the character himself and how do you bring those out and make him more realistic? But then also, you can’t make him too sympathetic, because at the end of the day, you have to be able to dismiss that kind of character because they’re wrong in every way, shape and form."

While mainstream media outlets were taken aback by the success of Diary, Underwood had been aware of Perry’s growing theatrical following. He also knew that while Perry’s signature character of Madea – she’s the tough-talking woman who looks like a linebacker in a dress – seemed like a caricature to some viewers, she’s much more than that.

"The Madea character in my life is a combination between paternal grandmother and my mother, that person who loves you, who’s not afraid to rattle your cage a little bit if it needs to be, which is not actually politically correct nowadays – not only in a loving, physical sense, but in an intellectual sense, saying what needs to be said and telling you the way it is – minus the pistols in the purse," he admits.

Of course, the only thing more difficult than playing a complicated and compelling villain may be playing that kind of character opposite your director in drag.

"You’ve just got to know that going in – children, animals and Tyler Perry, you’re gonna get upstaged," Underwood says with a chuckle. "Truthfully, he’s a very giving collaborator, whatever hat he wears."

Underwood, also currently on the big screen in Something New, just hopes that viewers of all demographics will be able to see the movie and recognize their own Madeas and their own families.

"One person said – who happened to be Caucasian – at one of the test screenings said, ‘This movie is for anybody with a pulse,’ and it’s true. It’s the same basic themes for anyone who’s human – of forgiveness, of redemption, of empowerment, of joy, all those are human emotions."

Madea’s Family Reunion is currently in theatres.
Article posted on 2/27/2006
This article has been viewed 4929 times.