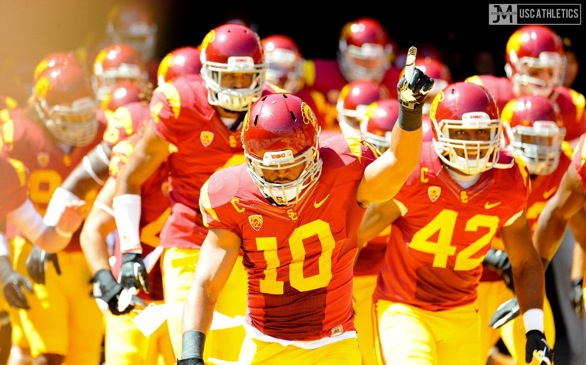 (MCT) LOS ANGELES — For much of June and July, USC is calm in the morning. A few students meander to summer classes, strolling next to a construction site where work won’t pick up until later in the day. It’s peaceful, really.

But make a couple of turns and head past the swim stadium and the atmosphere changes. Walk past a field that has been closed for maintenance, and turn a corner to reach Cromwell Track & Field Stadium and you come upon a place where peace and quiet go to die.

It’s 7:30 a.m. on a Friday and the USC football team is working out like it’s the week before the Rose Bowl.

While runners jog on the track that circles the field, two large speakers blare music from the infield, inspiring players on the sidelines to dance and bob their heads.

There are enough Trojans here to fill two full offensive and defensive units and then some, so players rotate in and out during full-speed, no-contact situational scrimmages. On the sidelines, student managers hold up large signs with pictures that form a code calling for the next play.

The NCAA has rules that limit a team’s practice time, so coaches can’t be present and these workouts are theoretically voluntary. So instructions are barked from players to players. Mess up and you get a teammate in your face.

The most animated of the players is Cody Kessler, a redshirt junior who is shouting orders across the field. Every position group has a de facto leader, but if there is an acting head coach among them it is the Trojans’ starting quarterback. He starts a seven-on-seven drill, transitions to the full-team workout, and keeps track of time.

“Make sure it’s realistic!” he yells time and again.

This scene isn’t unique to USC. Many of the nation’s top programs have well-attended voluntary summer workouts. But it is something new to USC, where under former coach Lane Kiffin attendance at these sessions was relatively sparse and nowhere close to the same intensity.

Even though USC coaches are not allowed to take part in the practices or even receive reports about them, first-year coach Steve Sarkisian made it a point to emphasize the importance of these voluntary sessions when he had the team together for spring practice. With a new coaching staff bringing in new strategies and philosophies, there was a sense of urgency.

The only guidance the players receive is from the school’s strength and conditioning staff, which is allowed to work with team members for eight hours a week. That allotment includes twice-weekly 6 a.m. runs. “After that, it’s on them to get themselves organized for the player-run practices,” said Ivan Lewis, a USC strength and conditioning coach. “As soon as we leave, they are ready to rock and roll.”

Kessler has been pleased with the results. “A lot more people are showing up and it’s a lot more organized in the sense of guys not sitting down or messing around,” he said. “This year, I feel like our workouts have been great.”

The Trojans have been convening twice a week, on Tuesdays and Fridays. An unofficial count last Friday found 64 Trojans on the field for voluntary work in preparation for the opening of training camp Aug. 4.

Kessler said it is important for everyone to come in with a solid understanding of the playbook.

“The coaching staff obviously wants guys to be out there, but they have no control over it,” he said. “They can’t force you to be out there. I think the guys wanted to be more accountable and took it upon themselves to come out here and get better every day and make the team better. Especially being a quarterback, that’s cool to see from your team.”

USC is on its fourth head coach since the beginning of last season. Kiffin was fired after a September loss to Arizona State, Ed Orgeron wasn’t retained at the end of the regular season despite going 6-2 after his promotion to interim coach, and offensive coordinator Clay Helton was in charge for a win over Fresno State in the Las Vegas Bowl.

Kessler said the Trojans might be better for the tumult.

“A lot of stuff happened last year that brought the team really close, and a lot of the guys from last year are still on this team,” Kessler said. “We’re still like family. We treat the new guys who weren’t here like family, so you’re just looking out for your brother. That’s the thing that Coach O taught us.”