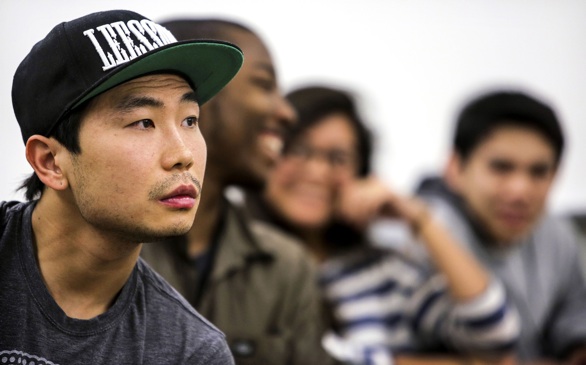 (MCT) California State University will have to cut planned enrollment growth for the fall term -- from about 20,000 to 10,000 students -- after state funding fell short of expectations.

The more pessimistic assessment was presented Tuesday to the Board of Trustees, at its regular meeting in Long Beach.

The 23-campus university system had been lobbying for a funding increase of about $237.6 million -- instead of the $142.2 million proposed by Gov. Jerry Brown -- based on projections of higher than estimated state revenue.

The California Senate and Assembly had proposed an additional $95 million to $100 million for the system, which would have supported an additional 20,000 students, 500 more faculty, essential building repairs and other services.

But it wasn't to be. The state's final budget agreement assumes a lower level of revenue and puts the system's funding increase back where it started, at Brown's $142.2 million -- the same as committed to the University of California.

The revised budget will accommodate about 9,900 additional students, meaning about 10,000 qualified students would be turned away.

Cal State Chancellor Timothy White spoke about the difficulty of balancing access with the need to provide academic support to current students.

"From an integrity point of view, when we open our doors, we want to be able to serve that student. If that means we have to leave another qualified student out, we need to do that, as tough as that may be," White said.

The lower level of funding will mean adjustments on most campuses. Cal State Northridge will still hire faculty but not as many, said President Dianne Harrison.

The campus will probably close spring enrollment to new transfer students and defer many maintenance needs, Harrison added. She said these include roof repairs and adding air conditioning and hot water in buildings that lack them.

The school is relying more on donations, research grants and other philanthropy and more aggressively pursuing revenue from movie and television filming on campus, she said.

"I'm not going to assume that in the next 10 years the state of California is going to turn around and double the budget," Harrison said. "We're forcing ourselves to be more creative and entrepreneurial."

After years of recession and budget cuts, Brown last year proposed a multiyear funding plan for higher education, with incremental increases tied to tuition freezes. Although Cal State leaders said they welcomed the increased spending, discussion centered on the consequences of closing the doors to thousands of students clamoring for a seat.

Trustee Lou Monville noted the increasing demand from community college transfer degree students, who under law are now guaranteed admission to Cal State, and the prospect that they might one day displace new freshmen.

"That pipeline is going to increase," Monville said.

One avenue of increased revenue recently was restricted when the Legislature placed a moratorium on so-called student success fees until January 2016. Opponents of the controversial fees, which are assessed to students in addition to tuition and are in place at 12 campuses, said they violated the system's commitment to hold student costs steady.

The chancellor is required to review the fee policy and recommend changes to the board by February 2015.

The revised spending plan protects about $92 million allocated for a 3% salary increase for the system's 45,000 faculty and staff. Final compensation would still need to be decided through collective bargaining.

Cal State leaders were criticized when, during the worst of the recession, they raised salaries for campus presidents while also increasing tuition.

White said the faculty and staff raises were fair and a "long-needed investment in student achievement."

"The strength of this organization rests on the backs of faculty and staff," White said.