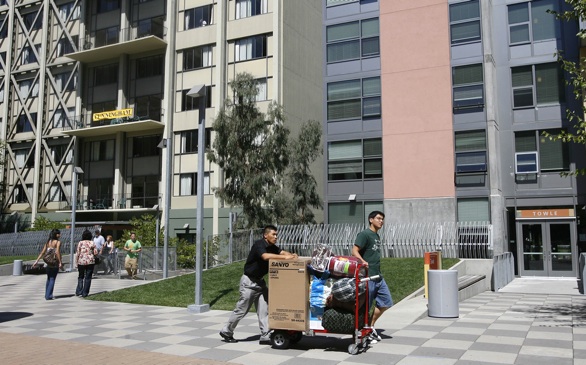 (MCT) The number of new UC students from other states and nations will continue to increase this fall, extending a trend that university officials say is financially necessary but critics say is changing the nature of a beloved state institution.

The percentage of all new UC freshmen who come from outside California is expected to be 20.2%, up from 18.3% last year and 15.5% the year before, according to preliminary data based on students' statements that they will enroll.

Among the nine UC undergraduate campuses, the percentages are the highest at UCLA with 30.1%, UC Berkeley with 29.8% and UC San Diego with 28.4%. The lowest shares were at UC Merced with 1.2% and UC Riverside with 6.9%.

However, UC officials say that the rise in new out-of-state students is not reducing the ranks of California freshmen, who are expected to total 35,943, just 21 fewer than those who said they would attend last year at this time.

Administrators say that the nearly $23,000 that nonresidents pay annually on top of the regular $12,192 tuition helps support classes and financial aid for Californians.

While the share of non-Californians among UC's overall undergraduate student body has increased from 4.6% in 2007-08 to 11.4% last year, UC still enrolls much smaller numbers of out-of-staters than other highly ranked state universities, such as the University of Michigan and University of Virginia.

According to the new statistics, 3,691 U.S. students from other states have said they will enroll as UC freshmen, up 389 from last year, and 5,412 international students have indicated that they will come to UC, 662 more than last year.

"Undergraduate and graduate students from throughout the United States and the world bring fresh perspectives and, in an increasingly interconnected world, help California students better prepare to operate in the global economy," she said in an email.

The extra tuition they pay "is crucial to UC's core academic mission," given past cutbacks in state funding and a tuition freeze in its third year, she said.

However, some critics say UC has become too dependent on that out-of-state income and that California taxpayers and UC alumni are feeling estranged from the university.

Patrick Callan, president of the Higher Education Policy Institute in San Jose, said he thought such a high number of non-Californians at UC would result in "a short-term boost in revenues but at the expense of long-term educational policy and public confidence."

He said that California families would feel that their youngsters were being squeezed out of the most competitive UC campuses, and that might discourage some high school students from even applying to them. "It sends the wrong message," he said.

Nonresidents comprise 14.2% of new transfer students to UC, up from 13.4% last year. Students who transferred from within California totaled 16,108, just 20 fewer than last year, and transfers from elsewhere totaled 2,673, or 178 more than last year.

Among ethnic groups, Asian Americans once again comprised the largest group of new UC freshmen, 39.4%, the statistics show. Latinos are expected to be 29.8% of the freshman class, whites 23.1% and blacks 4.1%.