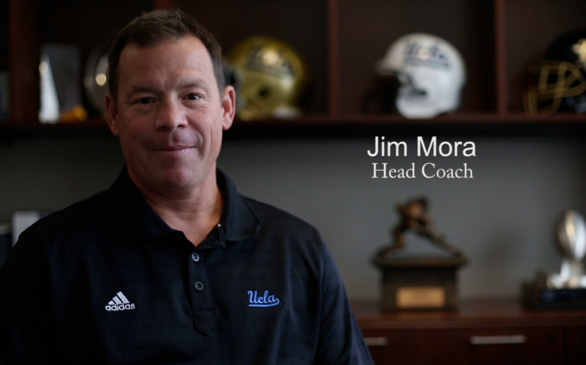 (MCT) This might not be a season of firsts for the UCLA football team, but it has a chance to be a year of first-in-a-long-times.

The Bruins' last conference title was won in 1998, three coaches ago. Their last victory in the Rose Bowl game came in 1986, before Troy Aikman took his first snap wearing the blue and gold. And their last -- and only -- national title was won in 1954, during the Eisenhower administration.

Is the time right for a renaissance?

The Bruins have won 19 games over Coach Jim Mora's first two seasons and claimed the Pac-12 South Division in 2012. They have back-to-back victories over USC for the first time this century.

All of which has won over fans, even the small faction that derided the hiring of Mora two years ago. Quarterback Brett Hundley's choice to return to Westwood rather than declare for the NFL draft and an ever-growing group of supporting talent has them wanting more.

"Expectations are high," Hundley said. "People are talking about us being in the playoffs, playing Alabama to get to the national title game. There is so much out there right now."

It's enough to make a player's head spin.

"It's cool thing to be looked on as one of the premier programs," linebacker Myles Jack said.

The possibilities come with a warning label -- in the form of a repeat-it-until-you learn-it stump speech from Mora.

The program's success to this point, Mora said, merely means "we're on the right track." The off-season chatter "doesn't mean anything unless you take care of business."

The college football world expects business to be good in Westwood. Among some who are paid to talk and write about such things, the Bruins are a trendy pick to win the Pac-12.

Mora has no one to blame but himself for the lofty expectations. UCLA had a 81-80 record since winning its last conference title before he arrived.

Now UCLA, with a boost provided by money from the Pac-12 Conference's television contracts, has a seat at college football's adults table after years of begging for scraps.

The assistant coach pay pool was $1.645 million in 2011, the year before Mora arrived. Assistants will earn $3.620 million this season, not counting signing and retention bonuses. There are blueprints for an on-campus, football-only facility, and fundraising for the $50-million project reached $30 million in May. And the consecutive victories over USC have UCLA viewed as Los Angeles' top college football program.

"It's always a work in progress," Mora said of the growth in his program. "If I ever get to the point where I sit back and say, 'Yup, we got it the way we want it,' that's the start of the downfall."

His players are at least saying the right things.

"Nothing changes," safety Anthony Jefferson said. "We have that same mentality that we had last year. We've got to go out with a chip on our shoulder. We can't let the success affect the upcoming season."

Still, the stars may have aligned.

The Bruins are expected to be a top-10 team when the Associated Press preseason poll rolls out next month. The last time that occurred was 1998, when UCLA checked in at No. 6.

There are similarities between now and then. Both teams won 10 games the previous year, including a bowl victory in Texas -- the Cotton Bowl then, the Sun Bowl now.

There was a fledgling Heisman Trophy campaign for a quarterback -- Cade McNown then, Hundley now.

The coaches were entering their third season -- Bob Toledo then, Mora now.

And there was a new system to reach the national title game -- the Bowl Championship Series then, the four-team playoff chosen by a selection committee now.

Of course, 1998 ended in disappointment, with a UCLA loss to Miami in the season finale that cost the Bruins a spot in the national title game.

Mora and his players are trying hard not to get caught up in the hype.

"We have to keep the task firmly in hand," Mora said. "That's my job as coach."

The coach has his own set of reality checks.

"When a program goes from where we were to where we are, and it being Los Angeles, there is a lot of coverage," Hundley said. "People have taken notice.

"We have to remember what it took to get us to this point."

Go to latimes.com/sports for the latest news on all the teams from Pac-12 Conference football media days Wednesday and Thursday.