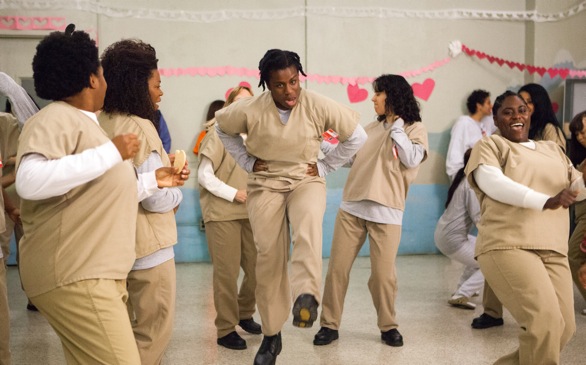 Let's hope Netflix's upcoming series measure up to the likes of 'Orange is the New Black.'
(Credit: K.C. Bailey for Netflix)

Can’t get enough of Netflix’s Original Shows? Well, good news for you: the “network” will be debuting some new original shows as well as the third seasons of “House of Cards” and “Orange Is the New Black." Yep, Netflix is bringing all of you binge-watching college students even more shows to binge on.

Here is the list of what to stay tuned for:

“Marvel’s Daredevil”
This will be a four-series partnership with Marvel Television that will lead up to the “Defenders” miniseries. It will star Charlie Cox (“Boardwalk Empire”) in the leading role, with Vincent D’Onofrio (“Law & Order: Criminal Intent”) as the antagonist and Deborah Ann Woll (“True Blood”) as his love interest. “Jessica Jones,” “Iron Fist” and “Luke Cage” will follow this series before leading into the miniseries. Let’s just hope this is better than the Ben Affleck film.

“Sense8”
Sci-fi fans will enjoy this show written and directed by the creators of the Matrix trilogy, Andy and Lana Wachowski, and produced by "Babylon 5" creator J. Michael Straczynski. This series is about eight strangers from different parts of the world who share a violent psychic vision and suddenly become telepathically connected. One man will bring them together, while another will attempt to kill them. Each episode will center around one of the strangers and their story. The cast includes Daryl Hannah (“Lost”), Alfonso Herrera and Brian J. Smith (“Stargate Universe”).

“Narcos”
If you are still reeling from “Breaking Bad” withdrawals, the solution is just around the corner. “Narcos” will be a series centering on real life drug lord, Pablo Escobar, and the Medellín Cartel. It will explore the history of cocaine, from how it started in Columbia to how it became such a huge problem in the U.S. and Europe. Also starring is Wagner Moura.

“Gracie and Frankie”
This will be a half-hour comedy series starring Jane Fonda and Lily Tomlin as longtime rivals who get the surprise of their lives when their respective husbands announce they are in love with each other and plan to get married. Martin Sheen and Sam Waterston will play the husbands. Think of it as your new favorite frenemy show.

Untitled Series
Release Date: Unavailable
Last but not least, Netflix is currently shooting a yet to be titled series in the Florida Keys from the creators of “Damages.” The series is described as a “dark family thriller” and will star Sissy Spacek (Carrie), Kyle Chandler (“Friday Night Lights”), Chloë Sevigny (Boys Don’t Cry) and Steven Pasquale, among others.

Get ready to get your binge on!