Report: No Bachelor's Degree Needed for Most Health Care Jobs 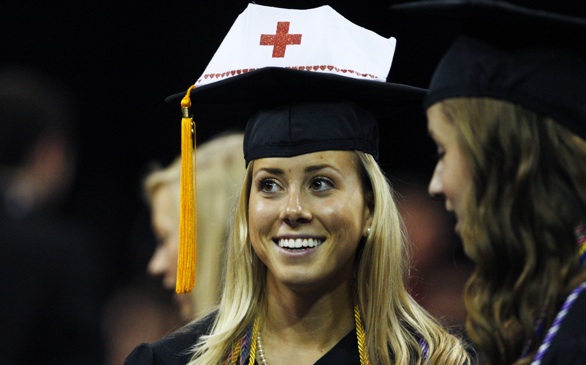 Who says you need a degree?
(Credit: Gerry Melendez/The State/MCT)

(MCT) Think you need extensive time in college to work in health care?

A study released Wednesday found the majority of local health care jobs are filled by people with an associate’s degree or less in education, and the demand for such pre-baccalaureate workers has been booming.

That’s good news for people like dental hygiene student Briana Grimmer, who laughed after admitting she enrolled in the Luzerne County Community College program because “I’ve loved teeth all my life.”

Grimmer opted for the two-year degree, but could have gotten a foot in the dentist office door with a single year of training to be a dental assistant, the second-fastest growing, non-bachelor’s degree health care job in the Scranton/Wilkes-Barre Metropolitan Area.

The field has nearly tripled locally since 2000, according to the report.

Dubbed “Part of the Solution: Pre-Baccalaureate Healthcare Workers in a Time of Health System Change,” the report was issued by the Brookings Metropolitan Policy Program. It looked at 10 broad occupations in health care that require less than a bachelor’s degree, breaking down the data for each of the nation’s 100 largest metropolitan areas.

Locally, such occupations make up 54.2 percent of the total health care job market, higher than the national rate of 49 percent.

Personal care aides frequently do not need any college education, the Brookings report noted, which is also the case for the “nursing, psychiatric and home health aides” category.

Predictably, the study found that pay in all 10 occupations correlates with education required.

The highest paying jobs, registered nurse and diagnostic technologists and technicians, typically require at least an associate degree, and nationally pay an average salary of $60,000 and $52,000 respectively.

The average pay for register nurses locally was considerably lower at $50,000.

Scalzo said all the occupations reviewed in the report are critical components of the overall health care system. Personal care aides help the elderly either stay in their own homes with visits or get the services needed at day care centers run by Geisinger.

Technologists and technicians help spread the workload at health care facilities, supporting those with higher degrees who do some of the more complex work in labs and radiology centers, Scalzo said.

“Without those individuals in the hospital, we couldn’t run the operation,” Goble said. “Just like you need nurses and doctors, you need the support workers. They are critical to the care of our patients.”

And even though the hospital has a tuition reimbursement program to encourage employees to further their education in the field, “I don’t think it’s utilized as much as I’d like,” Goble said.

Why not? Goble speculated that for many, “if you’ve ever worked full-time and tried to go for a four-year degree, life kind of gets in the way. It can be hard to balance school with family and work.”

There’s also an economic reality regarding registered nurses contemplating returning for a bachelor’s degree, Goble said. “Presently in our market there is no difference in pay whether an RN has an associate degree or a bachelor’s. A bachelor’s is useful if you are going more toward a management position.”

But one of the big reasons to go into health care through the positions that require less than four years is the ability to get a job quickly but still have the option of going back for additional education later, Luzerne County Community College Dean of Nursing and Health Sciences Deborah Vilegi-Peters said.

“I always look at it from the perspective that everyone needs to start somewhere,” Vilegi-Peters said. “Licensed practical nurses are paid well and can bridge to registered nurse.”

Similarly, an emergency medical technician can contemplate more training to become a paramedic, and a paramedic can move into nursing. A certified nurse’s aide can move on to LPN, then to RN.

“It gives them the advantage of getting their training at a lower cost and going right into the workforce,” Vilegi-Peters said. “That gives them a chance to see how rewarding the work is, and these careers are very rewarding.”

For Grimmer, the LCCC student, there’s no need to start working in a dentist’s office to know it’s rewarding. She said she had a good bit of dental work as a child, including braces, and unlike most people who might cringe at the probing and scraping, she found it all pretty cool.

But other students in her class had more diverse reasons for being there. Scott Ashford of Mountain Top said he already has a degree in music — he sings — but he “never really looked for a job” in that field.

Why go back to school to become a dental hygienist? “I have a lot of family in the field,” Ashford said.

Incidentally, he was only one of two men in the class of 23, which mirrors general data for the non-bachelor health care jobs reviewed in the report: Locally, almost 86 percent of the people in the 10 occupations studied were female.

Caryn Cave, of Wilkes-Barre, said she had worked and traveled, married and had two children — and it was the family demands that prompted her to get into the dental hygienist program.

“It’s a job that works better with their schedules,” Cave said.

Heading back to college at the age of 32 has another family advantage: It sets a model for her young children.

“I’m showing them that going to school is always a good thing.”