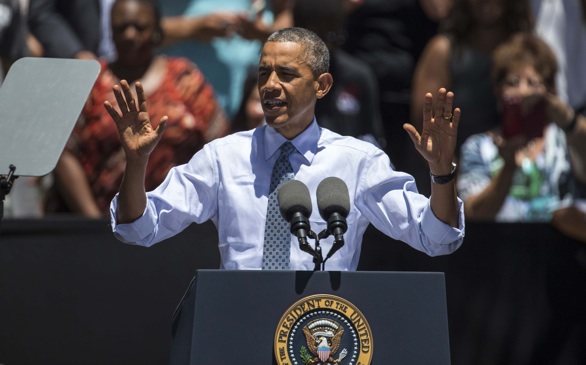 (MCT) President Obama may rake in the money from fawning donors during his two-day fundraising sweep through Los Angeles this week, but he's not winning any fans among commuters who, as they do, take to social media to vent.

“Obama is visiting Los Angeles today which means I won’t be home till around 7:30pm due to traffic delays. #SMH” tweeted Twitter user West Coastin'.

“If you're on the Westside today ... don't get trapped in traffic. Obama's a'comin!” said Twitter user Byrd.

Some street closures began at 9 a.m. Wednesday, which Instagram user “mymymisty” was already suffering through, prompting this post: “The Prez is in town! #ugh #traffic #alwayspleasuremrp #thanksforstreeetclosures”

Two common hashtags that were popping up on local social media ahead of the president's arrival were #Obamatraffic and #ThanksObama.

Twitter user Lark Anderson blamed the president for being late to work, tweeting: “Today I was late to work because of POTUS #ThanksObama”

Twitter user JonathanDanielBrown had a cynical take on the president’s visit, tweeting: “President Obama's here for two $32,500 a plate dinners, so try not to drive because traffic will be bad for the rest of us poors.”

Twitter user Grace Chai took a more light-hearted approach, noting that Beyonce’s caravan for her concert in Pasadena next week may also clog up some lanes.

“People be complaining about traffic from the prez coming to town but ain't no one prepared for next Wednesday when the Queen Bey arrives!!!” she tweeted.

Here's a look at the L.A. street closures planned over the president's two-day visit:

From 9 a.m. to 4 p.m. and 6 to 8 p.m. Wednesday, police will be blocking traffic around Beverly Boulevard and North Doheny Drive.

From 2 to 4 p.m., the area around La Brea Avenue and West Olympic Boulevard in Mid-Wilshire will be affected, and from 4 to 8 p.m., roads around West 3rd Street and Rossmore Avenue in Hancock Park will see delays.

Rimpau Boulevard, between Edgewood Place and Olympic, and Olympic between Rimpau and West boulevards, will also be shut down the entire day, according to the LAPD.

From 4 a.m. to 5 p.m. Thursday, the area around Beverly and Doheny will remain affected by the president’s visit, along with the area around Grand Avenue and West Washington Boulevard downtown.

The president will be in the Pacific Palisades area of Sunset Boulevard and Mandeville Canyon Road between 9 and 11 a.m., then Brentwood between 10 a.m. to noon and Exposition Park, and near Figueroa Street and Martin Luther King Jr. Boulevard from 1 to 3 p.m.