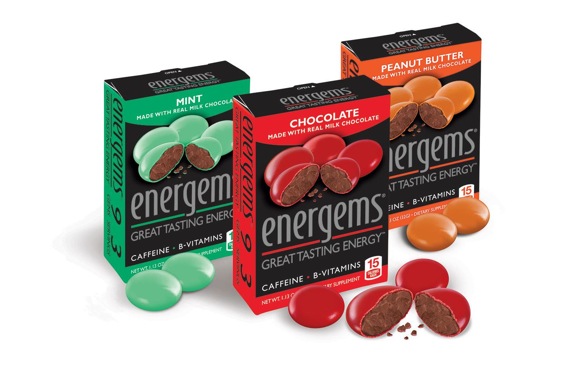 College students who are short on energy, but don’t like to guzzle down cups of coffee or energy drinks, can turn to an easier (and arguably tastier) alternative: Energems.

Energems are candy-like dietary supplements that resemble a huge M&M. They come in different flavors, including chocolate, mint chocolate and peanut butter, and contain B-vitamins and, most importantly, caffeine.

According to its supplement facts, three gems total contain only 45 calories but 75 mg of caffeine. For moderate energy, they recommend you take three pieces; for maximum energy, take nine, which is a whole box (however, don’t exceed two boxes daily). A box of Energems measures up to three cups of coffee or three 8 oz cans of a leading energy drink. It should also be noted, however, that the FDA has not evaluated all of Energems' statements.

Combining chocolate and caffeine to create an energy candy seems like a genius idea, so we gave two college students a box and asked them to give their opinions on how well this product works.

Student A described Energems as the perfect coffee substitute, noting eating the chocolate gems gave her energy without “awful coffee breath, yellowing teeth and a racing heartbeat.” Plus, it was a real money savor for the student.

“The first time I tried these gems, my day started at 9 a.m. I took three gems at 11 a.m. and, even after a three-hour hike, I was still alert and awake by midnight,” she said.

However, Student A did recognize that the gems’ taste might be a little too bitter for those with a major sweet tooth.

Student B also appreciated Energems’ ability to keep her energized, but she admitted she would actually stick to coffee.

“The chocolate itself didn’t taste too bad, although it had a weird after taste, but I was not a fan of the jittery feeling I got 30 minutes later,” she said. “Also, the fact that three of them equals one serving is misleading, as just one of them will give you a lot of energy. “

But still, when you’re in a crunch, cramming for a test late at night and trying to stay awak, Student B recommends popping in an Energem. “I say only use this for when you really can’t stay awake (i.e. desperate times),” she said.

Overall, an Energem seems like a viable option for those who need extra energy to get through the day, long classes or those stressful nights where you have to study hundreds of notes and write a paper. Just make sure you proceed with caution and try one gem instead of all three your first time.

According to its website, you can buy Energems at retailers such as Circle K, 7-Eleven and more. A three-pack variety of Energems costs only $8.50 online.