You Can't Wear Native American-Style Headdresses at this Music Festival 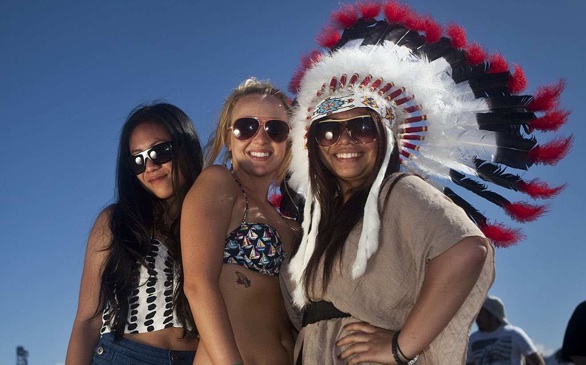 "We understand why people are attracted to war bonnets. They have a magnificent aesthetic. But their spiritual, cultural and aesthetic significance cannot be separated … Bass Coast festival takes place on indigenous land and … we feel our policy aligns with [aboriginal peoples'] views and wishes regarding the subject. Their opinion is what matters to us," said the festival organizers in a statement, according to the Guardian.

Those in the U.S., and especially those who attend Coachella, who wear the headdresses most likely don't mean any offense to Native American tribes and cultures. However, as Buzzfeed pointed out, wearing the headdresses does in fact appropriate and stereotype Native people.

Buzzfeed sites from an essay that wearing the headdress "furthers the stereotype that Native peoples are one monolithic culture, when in fact there are 500+ distinct tribes with their own cultures. It also places Native people in the historic past, as something that cannot exist in modern society."

Recently, more attention has been drawn to those who offend by wearing the accessory. Khloe Kardashian was under harsh scrutiny when she wore a Native American headdress to her niece's "Kidchella" and posted the photo on Instagram.

Before that, "Happy" singer Pharrell Williams received backlash when he posed on the cover of Elle, wearing an Native American headdress as well. According to the New York Daily News, he apologized for the photo. "I respect and honor every kind of race, background and culture. I am genuinely sorry," he said.

Who knows if any U.S. festivals will follow Bass Coast's example and ask fans to be respectful to Native American people. My question to future festival attendees: what's wrong with just wearing a cute, pretty hippie headpiece with flowers instead?

Blog
What qualifies as 'cheugy' in the Northwest? Generation Z weighs in
870 views

Blog
Don’t hit the beach without them: the bare essentials
1,898 views

Blog
Most Beautiful Woman Sandra Bullock: "The most beautiful are the ones who aren't trying"
1,545 views