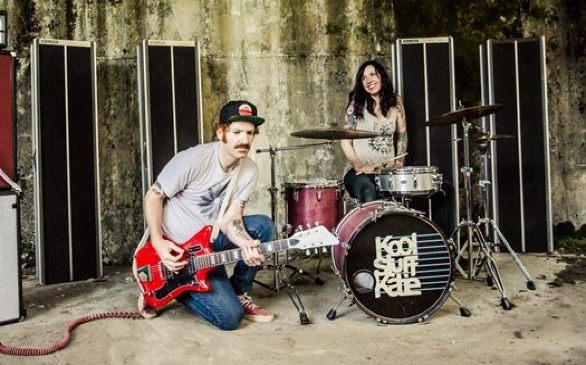 Portland, Ore. power-pop duo Shane Blem and Saren Oliver, aka Kool Stuff Katie, believe in simple things: hanging out and watching TV, making out instead of going out or walking rather than driving. And aptly, “Simple” is the title of a tune from the band’s self-titled, self-released debut.

The basic guitar, drums and twinned harmony vocals are no-nonsense but not primitive; don’t lump Kool Stuff Katie in with the White Stripes or the Black Keys.

The 10 brief, catchy tracks evoke artists such as the Buzzcocks (the energetic punk-pop piece “I Can’t See”), the Rentals and Weezer (the back-to-nature number “Cars”) or electronic proto-punk outfit Suicide (the minimalist, keyboard-drenched “What Do You Say”).

When needed, Blem and Oliver slow their momentum on melancholic, rain-washed “Rewind” or “Three Shades of Red,” about a romantic tiff.

While Kool Stuff Katie doesn’t create anything intrinsically new or original, that’s not the point. This music has snap, crackle and lots of pop along with tints of intended nostalgia, meant to be taken as it is.