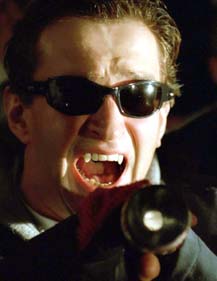 The timeless battle between Good and Evil goes into maelstrom mode in Night Watch, as a swarm of ravens whoosh through the Moscow skies and various normal-looking citizens suddenly start quaffing pig’s blood and walking dazed into oncoming cars.

The Russian horror pic, a huge hit in its homeland, describes a world in precarious balance, teeming with vampires and unseen spirits, beneficent and bad.

Timur Bekmambetov, a director who cut his teeth, so to speak, on TV commercials, orchestrates this undead drama with whooshing elan, no little humor, and doses of gore that are all the more effective for their (relative) rationing.

Although a voice-over prologue rumbles ominously in English, most of Night Watch is in the mother tongue, but even the subtitles do weird things – flying around in different sizes and fonts, punctuating the action. And action there is: witches aborting embryos telepathically; impromptu open-heart surgery in an electric company’s boardroom; massive rooftop battles; and jumbo jets in danger of plummeting to Earth.

Based on an occult novel, Night Watch is the first in a promised trio of films that follows "the Others" – humans with supernatural powers who in effect function as U.N. peacekeepers, maintaining a delicate truce between the armies of Light and the armies of Darkness.

Anton (Konstantin Khabensky) is one such Other, and his mission, should he choose to accept it (he really has no choice), is to rescue a young boy named Egor (Dima Martinov) from a band of thuggish vampires. On the subway en route to a creepy warehouse where Egor is being held, Anton spots a woman whose hair is blowing straight up in the air: There’s some kind of cosmic vortex being funneled from her noggin into the night sky. That can’t be a good thing, can it?

Following the carnivorous convolutions of Night Watch’s plot is no easy task, but director Bekmambetov paints an eye-popping canvas: dark, ratty, full of blood and seamless CG effects. The look (and spirit) of his movie bear kinship to Jean-Pierre Jeunet and Marc Caro’s Delicatessen and David Fincher’s Fight Club; the ghoulish goings-on are set in a decidedly decayed cityscape, and the faces of even the briefest-seen supporting characters are rich with circus-freak features: veiny, bulbous noses, sinister lips, eyes wild with madness and melancholy.

Although it doesn’t have Kate Beckinsale, her guns ablazin’, vamped out in the latest vampire-slaying couture, Night Watch is vastly more fun than the similar-themed Underworld pics. It’s a trip.

Night Watch is currently in theatres.
Article posted on 2/27/2006
This article has been viewed 1482 times.