The Neighbourhood Rocks Out Homecoming Show at the Greek 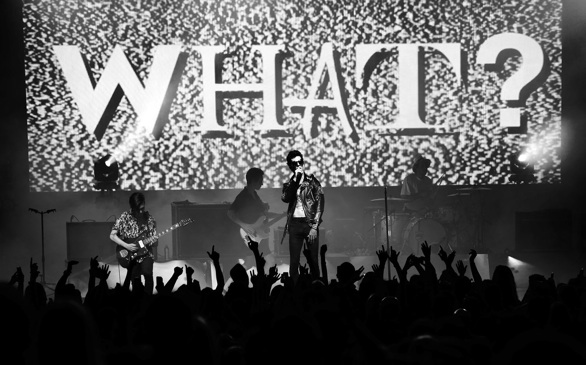 Thursday night, the Greek Theater in Los Angeles welcomed home The Neighbourhood, the local act who returned from a successful tour to a sold-out venue saturated with screaming fans. The band, known for its hit “Sweater Weather” from break-out album I Love You, jumped on stage with energy. Although its set was less than an hour and a half long, The Neighbourhood had the crowd on its feet until the end.

The show began around 7 p.m. with DJ Bradley Soileau and a performance by local indie rockers White Arrows, who did their best to entertain the venue as people purchased their food and drinks and found their seats. Looking around, it seemed that every 12- to 21-year-old in L.A. had purchased a ticket to the alternative/hip-hop bill. However, after speaking to parents and other eager fans, I found that many had traveled from Arizona, New York, Las Vegas and farther just to see the L.A. natives rock out at their home base.

When Danny Brown took the stage it was clear that although The Neighbourhood was the main act, many of the spectators were also there to see the swagger and talent of the Detroit native and the performer dubbed by MTV as “one of rap's most unique figures in recent memory.” Suddenly, everyone swarmed to their seats, and the energy kicked into turbo speed. Brown got the crowd hot and ready for the headliners with music from his three-album repertoire, especially his latest Old (2013). Those of us who hadn't seen him live before quickly became fans of his wordplay and commanding on-stage persona.

Rutherford was shirtless, wearing a leather jacket over his tattooed skin and black jeans. At first glance he looked like an incarnation of The Sex Pistols' Sid Vicious. Rutherford must have drank a bolt of lightning right before he took the stage, because the entire room was charged up like an electrical storm, with frenzied fans flashing their cameras and waving their hands in the air. Meanwhile, his comrades held their own, executing tune after tune with intense focus.

Rutherford's voice fluctuated between alternative hip-hop, to punk, to classic rock à la Steven Tyler. His vocal range is developed, and his presence onstage is candid, raw and in your face. Being at the show felt like partying with the coolest kid in school.

Of course, The Neighbourhood closed with the crowd favorite, “Sweater Weather,” which left everyone with a bittersweet taste. They wanted more, but the lights were already out. However, Rutherford jumped back onstage and said, “We are so sorry! We want to give you more, but these guys are being pussies, so we can only to play two more. Anyway, here we go!”

Sure the encore was short, but it was enough to appease the screaming fans that came from everywhere to watch L.A.'s favorite Neighbourhood.