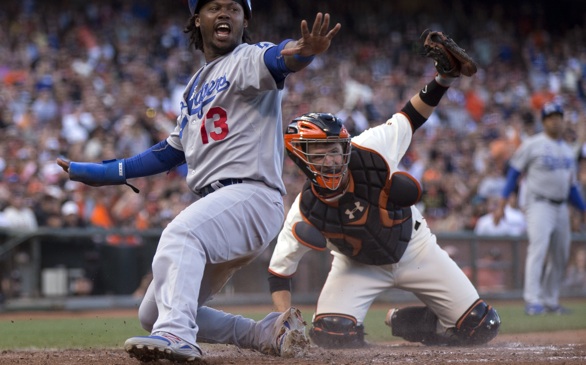 (MCT) SAN FRANCISCO — In the wake of a three-game sweep at AT&T Park, the Los Angeles Dodgers stand 1½ games ahead of the San Francisco Giants in the National League West.

After cruising to lopsided victories in the first two games of the series, the Dodgers closed out a dominant weekend Sunday with a 4-3 victory that was highlighted by Dee Gordon’s and Carl Crawford’s speed on the basepaths, as well as the defensive incompetence of the Giants.

“To come here and sweep them not only gives us the spot in the first place but also the mental edge, and we’re probably going to need that going forward,” Crawford said.

The Dodgers have 56 games remaining in the regular season.

The victory Sunday was the fifth on a challenging nine-game trip that started with series losses in St. Louis and Pittsburgh.

“It made everything great,” first baseman Adrian Gonzalez said.

The Giants are floundering. The have lost their last four games. They made a trade with the Boston Red Sox to acquire Jake Peavy, only for their lack of offensive firepower and shoddy defense to let him down in his first game with them.

They made two errors Sunday, both by stone-gloved second baseman Dan Uggla, whom the Giants signed last week. The second error helped create a Dodgers run in the fourth inning that tied the score, 1-1. That run was carried home by the fleet-footed Crawford, who scored from second base on Juan Uribe’s single by narrowly beating a throw to the plate by left fielder Michael Morse.

Catcher Buster Posey had trouble blocking Peavy’s pitches in the dirt, which played a significant role in the Dodgers’ three-run fifth inning.

Gordon struck out, but reached first on what was scored as a wild pitch. Yasiel Puig drew a walk, after which Peavy threw another wild pitch. Suddenly, runners were on second and third base with one out.

Gonzalez struck out, but, again, Posey couldn’t handle a third strike in the dirt. Posey retrieved the ball and threw out Gonzalez at first base, but neglected to look Gordon back to third before throwing. Gordon broke for the plate and beat the return throw home, tying the score, 2-2.

“He took his eye off of me, so I went home,” Gordon said.

“That was a key momentum shifter for us,” starting pitcher Hyun-Jin Ryu said. “It changed the energy of the team.”

Hanley Ramirez followed with a single to center field that drove in Puig. Then Ramirez scored from first on a triple by Crawford. The Dodgers were up, 4-2.

Ryu won his third consecutive start by limiting the Giants to three runs and six hits over six innings. He credited his recent success to his slider, which he improved by consulting Clayton Kershaw.

Ryu said he asked Kershaw how he gripped his slider, then watched video of Kershaw to study his arm angle.

“I was able to make it my own pitch,” Ryu said, adding that he now throws his slider with greater velocity.

The series not only served as a reminder of the significance of the top of the Dodgers’ rotation — Zack Greinke and Kershaw won the first two games — but also introduced a measure of stability to the outfield. In all three games, Puig started in center field, with Crawford in left and Kemp in right.

“It feels like it has a more settled feel,” manager Don Mattingly said.

As pleased as Mattingly was with how the Dodgers played this weekend, he downplayed the significance of sweeping the Giants.

“You have a lot of baseball to play,” said Mattingly, who juggled his rotation coming out of the All-Star break so Greinke, Kershaw and Ryu could pitch here. “We’re going to see these guys again. They’re not going anywhere. They’re not going to quit.”

He knows from experience.

The last time the Dodgers swept the Giants here was in a three-game series played from July 27-29, 2012.

That weekend felt like this one. The Dodgers moved into a tie for first place with the Giants and momentum was on their side. They had recently acquired Ramirez and were on the verge of trading for Gonzalez.

The Giants went on to win the division by eight games.