New Personalized App, Imoji, Turns Your Face Into an Emoji 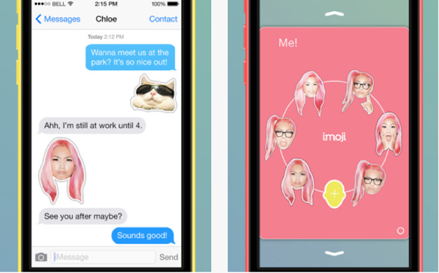 Sick and tired of not having an emoji that represents or even slightly resembles you? If so, download Imoji, a new personalized app that lets you turn your face into an emoji.

MTV reports six friends created Imoji because they were unhappy with emojis' limitations and confinements.

This free app is simple enough to use: just take a photo of your face (it doesn't have to only be a photo of your face, however; try taking photos of your pets!) with any emotion you want to convey, and upload it. Then, you can edit it a bit and insert it into your texts.

Emojis have become a large component within text conservations, as well as social media, for many users. Earlier this month, the announcement of an emoji-only social network coming soon, called Emojli, hit the blogosphere, and many have expressed their frustration with Apple's lack of emoji diversity. It's evident emoticons are increasing in popularity, calling for more emojis and emoji-related apps.

"Emojis are great at communicating an emotion or tone in a text message so they will continue to play a part in the way people communicate," Imoji app teammember Tom Smith told Forbes. "Where we think things are heading is a more flexible and creative form of communication, one which adds a new dimension to a text message. We’ve designed Imoji to be just that."