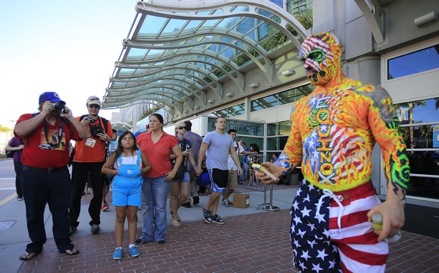 Comic Con, held at the San Diego Convention Center once a year, is a gathering of television, movie and comic stars and fans alike.

This convention is a chance to immerse yourself into the entertainment world, participating in interview panels with your favorite TV show cast, signings, exhibits, industry announcements, celebrity appearances, premieres and special viewings. People tend to go all out for this convention, donning costumes of their favorite characters. Ranging from horror to anime, the various genres bring in thousands of people to this weekend-long event.

With so many surprise guests and announcements, you’re going to find yourself green with envy after you learn about what TV and movie trailers, sneak peeks and surprises attendees were treated with this year!

8. Daniel Radcliffe’s Clever Disguise
We’re all used to celebrities disguising themselves from the paparazzi on the street by hiding behind sunglasses and a hat (even though it never actually works for them), but at Comic-Con, since everyone is dressed up in costumes, celebrities can easily get away with any disguise.

Harry Potter star, Daniel Radcliffe, dressed up in a full Spider-Man costume. No one recognized him as he walked on his way promote his new horror film, Horns. So basically, the beloved and idolized Harry Potter was walking amid his fans (a God amongst mere mortals), and no one had any idea.

7. Batman v. Superman Trailer Sneak Peek!
Comic-Con was originally meant for comic fans when it first started in 1970, and on Saturday, Marvel fans were able to rejoice for the first sneak peek of Zack Snyder’s forthcoming Batman v Superman: Dawn of Justice.

It must’ve been inspiring to have all those SUPERheroes together in one room.

5. Secret Screening of The Maze Runner
If you read this YA novel, you know that it’s absolutely mind blowing. If you haven’t, go buy yourself a copy right now.

The Maze Runner has been adapted into a big-screen film directed by Wes Ball, and Comic-Con attendees got to see the first screening of the movie. The incredibly positive Tweets from fans prove this movie is going to be just as amazing as the novel.

4. Mockingjay-Part I Teaser Trailer
When you first saw the release of the teaser trailer of the third installment of The Hunger Games franchise, you were probably at home, sitting on your bed, laptop in front of you, with a half empty bag of chips in hand. It can’t really get any better than that, right?

Comic-Con attendees had the chance to enjoy a first look at the Mockingjay-Part I trailer in an all white room where they got to make customized T-shirts, sit in President Snow’s chair and try baked goods from Peeta’s bakery. Don’t worry, my jaw dropped too when I found out.

3. "The Simpsons"/"Family Guy" Crossover Episode Teaser
The feuds over which show is better, "The Simpsons" or "Family Guy," can finally come to an end. These two satirical animated shows have been wildly popular for years now, and finally, Matt Groening and Seth MacFarlane have come together to create the greatest episode ever.

An extended, nearly five-minute teaser of the crossover episode of "Family Guy" and "The Simpsons" was revealed at Comic-Con.

When the Griffins find themselves in Springfield, they automatically bond with the Simpsons. Stewie and Bart, animation’s top two bad boys, come together for some diabolical adventures; Lisa helps Meg find something she’s good at; Marge and Lois abandon housework together; and Peter and Homer start out as best friends by bonding over donuts. However, the two patriarchs become enemies when Homer insults Peter’s Pawtucket beer.

The crossover episode “The Simpsons Guy” is set to air Sept. 28 on Fox.

2. Mad Max Trailer
After years of being delayed, fans were finally ready for the first clip of Mad Max: Fury Road, starring Tom Hardy as Max and Charlize Theron as commander Imperial Furiosa, with Nicholas Hoult, Zoe Kravitz and Rosie Huntington-Whiteley. The footage was just a succession of wild car chases, but to fans, it was much more.

Set in a dystopian future, Max is captured, tortured and fitted with a metal face mask. According to The Telegraph, the film has so little dialogue that Miller didn’t bother writing a script.

1. Fresh Meat on "Game of Thrones"
"Game of Thrones" has only 10 episodes for every season, and the show only airs once a year, so I think you’d understand why GoT fans get extremely excited when the cast and director throw them a bone when it comes to announcements on upcoming seasons.

At the "Game of Thrones" panel, the story’s creator George R.R. Martin revealed a new cast for Season 5. Keisha Castle-Hughes is Obara Sand, the warrior daughter of Prince Oberyn; Jonathan Pryce is High Sparrow, a religious leader in King’s Landing; and Alexander Siddig is Doran Martell.

Check out the full list of Season 5 cast members here!