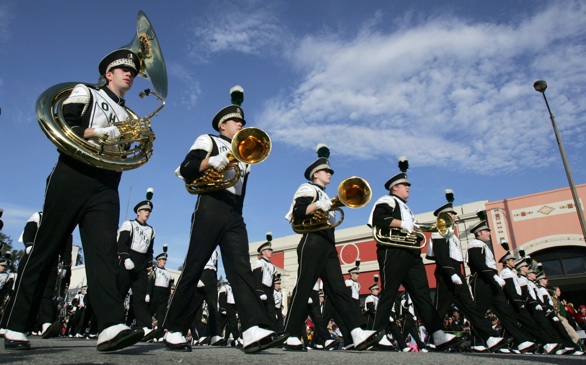 News about sex scandals on football or basketball teams are not uncommon (albeit still terrible), so when you read "Ohio State" and "sex scandal" in a headline, you might be surprised to learn that we're talking about the university's marching band—not one of its athletic teams.

According to the Columbus Dispatch, band members were given offensive nicknames, new members had to take a written exam called the "Rookie Midterm" that asked them to answer crude questions about their fellow band mates ("Who gets around more than a town bicycle? Who has the smallest wang/tits?"), and there was an unofficial Marching Band Songbook that contained songs with homophobic, sexual and misogynistic lyrics such as:

"Le Regiment is full of homos.

They are the guys to whom you should say no.

They're always dropping to their knees to blow."

Apparently, this was just the tip of the iceberg, as Cosmopolitan states the report also described "a male-dominated environment where jokes and songs about violence against women, groping, and sexual assault were standard fare, and where Waters did little to interfere."

Well, we don't think Waters will be playing any happy tunes anytime soon.