Four Arrested in Connection with Fatal Beating of USC Student 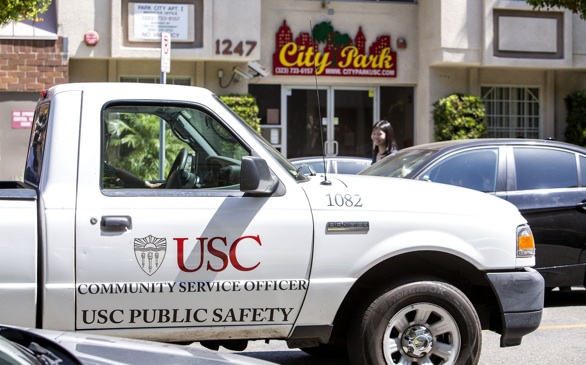 (MCT) Four teenagers were arrested in connection with Thursday's deadly attack on a USC graduate student, which Los Angeles police said was one of at least two alleged robberies the group attempted that day.

Xinran Ji, a 24-year-old engineering student from China, was beaten with a baseball bat as he walked home from a study group about 12:45 a.m., according to two sources familiar with the investigation. Despite a head injury, Ji managed to stagger back to his apartment, where he was later found dead. The sources spoke on the condition of anonymity because they were not authorized to speak publicly.

Investigators followed a trail of blood from his home to the scene of the attack just blocks away.

Detectives were looking into whether other weapons were used, the sources said.

Prosecutors were expected to file charges Tuesday, LAPD officials said. Smith said the murder charges would carry special circumstances allegations that would make the suspects eligible for the death penalty.

Police said that there were no indications the suspects were gang members, or that the attack was racially motivated.

Smith said two of the suspects were detained just hours after the attack, near the scene of a second alleged robbery at Dockweiler Beach. Two victims there flagged police down about 3 a.m., leading them to the two suspects. Detectives later linked them to the attack near USC.

A 14-year-old girl was detained in connection with the Dockweiler Beach robbery whom detectives also believe was involved in Ji's assault "in some manner," Smith said, though the "detail and depth" was not clear.

Detectives also said they believe the suspects may have committed other crimes Wednesday night or early Thursday, Smith said.

The law enforcement sources said security cameras and a license plate reader helped identify the suspects in Ji's death. USC Public Safety Chief John Thomas said the suspects were apparently not aware of the network of technology — including 150 cameras — scattered on and around campus.

Both the university and Los Angeles police amplified their security resources at the South L.A. campus and surrounding neighborhood after two Chinese graduate students were shot and killed in a botched robbery in 2012. Six months later, a man opened fire outside an on-campus Halloween party, injuring four people, though none of those victims were students.

As a result, cameras and license plate readers were added, about 1,500 feet of fence was built around the campus perimeter, and the LAPD devoted 30 officers to a University Park task force that works closely with the USC Department of Public Safety.

Todd Dickey, USC's senior vice president for administration, said Monday the result was "significantly improved security on campus and in the surrounding neighborhoods." But, he said, school officials were "reviewing everything" in the wake of Ji's death.

"No arrest or conviction in this case can ever achieve true justice," he said. "But the news today of the arrests of four suspects allows us to start moving forward from the shock of this tragedy."

Hours before the arrests were announced, the parents of the two students gunned down in 2012 called on the Chinese government to issue a "study advisory" for the university, which would alert Chinese parents of the safety risks they said came with attending USC.

Daniel Deng, a volunteer legal advisor for the families, said they were devastated by the news of Ji's death: "This kind of tragedy cannot keep happening."

Roger Xing, a spokesman for the Chinese Consulate in L.A., said it is providing assistance to Ji's parents and will work with LAPD and USC to better protect Chinese students at the university.

"The Chinese government is very concerned about the safety and well-being of its students overseas," Xing said in a prepared statement written in Chinese. "We are deeply shocked and strongly condemn this crime."

Ji, who came to USC last year, was an accomplished scholar and researcher in his native China, Dickey said. He was described as an avid photographer who loved cycling and playing badminton.

A memorial service was expected to be held later this week after Ji's parents arrive in Los Angeles.