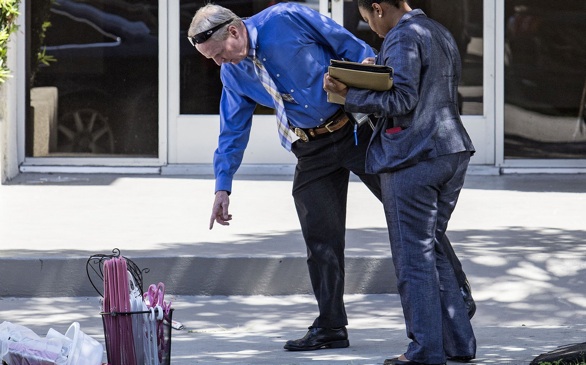 (MCT) Four teenagers were charged Tuesday with murder in the fatal beating of a USC graduate student, who law enforcement sources said may have tried to escape his attackers only to be assaulted again.

More details about Xinran Ji's death emerged as prosecutors filed charges against the suspects, identified as Jonathan DelCarmen, 19; Andrew Garcia, 18; Alberto Ochoa, 17; and Alejandra Guerrero, 16. The murder charge carries a special circumstance allegation that Ji was killed during an attempted robbery, allowing prosecutors the option of seeking the death penalty against DelCarmen and Garcia.

Three of the teens were also charged in connection with a second robbery that occurred hours later at Dockweiler State Beach. LAPD officials said there were no indications the suspects had gang ties, or that the attack was racially motivated.

Ji, a 24-year-old engineering student from China, was walking to his apartment near USC about 12:45 a.m. Thursday when authorities said he was attacked with a baseball bat. Despite sustaining a head injury, authorities said, Ji managed to make it home to his 30th Street apartment. A roommate found his body later that morning.

Evidence at the scene of the assault indicated that Ji had struggled to get away from his attackers, according to two law enforcement sources familiar with the investigation. The sources, who were not authorized to speak publicly, said detectives believe he was then beaten a second time.

A criminal complaint alleges that Garcia, Ochoa and Guerrero used a bat and wrench, though the extent of Ji's injuries were unclear. Coroner's reports are pending.

Family and friends packed two rows of seats in the courtroom where the teenage defendants made their first appearance Tuesday afternoon. Ochoa was near tears as he stood in front of a judge; Guerrero bowed her head, her blonde-streaked hair hiding much of her face.

Garcia's mother clasped her hands tightly, almost in prayer. "I love you," she mouthed to her son when he walked into the courtroom.

Their arraignment was postponed until Aug. 12. Each of the defendants remains jailed without bail.

Because of their ages, Ochoa and Guerrero will not face the death penalty, but prosecutors said they could be sentenced to life in prison without parole if convicted. California law allows prosecutors the discretion in certain crimes — including murder — to charge a minor as an adult. The courts, however, have ruled that minors are not eligible for capital punishment.

The Times generally does not name juvenile suspects unless they are charged as an adult, as they have been in this case.

After attacking Ji near campus, prosecutors allege the suspects drove to Dockweiler State Beach, where Ochoa, Garcia and Guerrero approached a man and woman. The three allegedly robbed the woman, but the man escaped and flagged down police officers who were patrolling the area.

A criminal complaint alleges the three again used a bat at the beach, but that Ochoa and Guerrero also used a knife.

Officers also detained a 14-year-old girl in connection with the Dockweiler incident; detectives believe she was involved in Ji's assault "in some manner," LAPD Cmdr. Andrew Smith said Monday. Charges have not been filed against her.

The two girls were detained by the officers who were flagged down by the man at Dockweiler State Beach, according to an LAPD source familiar with the investigation. Detectives from the department's Pacific Division began investigating the robbery, and later that day arrested the three other suspects and impounded a vehicle thought to be involved.

The attack on Ji comes two years after two USC graduate students — who were also from China — were shot and killed during a botched robbery near campus.

In a statement issued through a family friend, Ji's parents said they were "deeply concerned about other students at USC." They commended police for the arrests, but said they were "extremely angry about this horrific act of violence."

"We do not want to see another incident like this," Songbo Ji and Jinhui Du said in a statement written in Chinese. "No parents should have to bear this pain."