By Caitlin Owens and James Queally and Emily Alpert Reyes 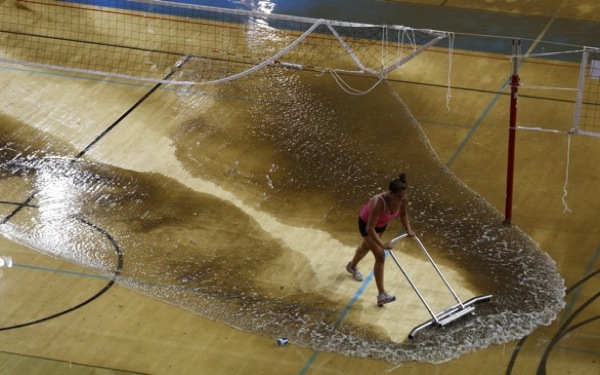 Water is cleared from the floor of Pauley Pavilion on the UCLA campus.
(Credit: Jay L. Clendenin/Los Angeles Times/MCT)

(MCT) A 90-year-old water main burst under Sunset Boulevard on Tuesday, producing a raging geyser that sent 8 million to 10 million gallons of water onto the UCLA campus, flooding several buildings, including the famed Pauley Pavilion.

It took the Los Angeles Department of Water and Power about four hours to fully shut off the 30-inch-diameter line as water inundated athletic fields, underground garages filled with cars and various campus walkways. No one was hurt, officials said, but swift-water rescue crews had to assist five people stuck in flooded garages.

The trunk line break offered dramatic new evidence of Los Angeles' crumbling water infrastructure, which has been a recurring problem for years. Large sections of the water system are old and corroded, and the city has struggled to find the money to replace them.

Water pipe breaks and leaks occur several times a day in L.A., but none in recent memory was as serious as Tuesday's flooding. DWP officials said the break was so extreme in part because the line pulls water down from the Stone Canyon Reservoir. When the line broke, water flowed out at a rate of 75,000 gallons a minute.

A series of major breaks in 2009 -- including one in which a sinkhole partly swallowed an L.A. Fire Department truck -- generated outrage and calls for action.

The city is slowly swapping out the old lines, but it would take several lifetimes to replace the entire system at the current pace.

DWP officials had hoped to secure a 5% water rate hike in the 2013-14 fiscal year, with some of that going to infrastructure improvements, said Fred Pickel, who serves as the utility's ratepayer advocate.

But that plan was dropped, he said, and there was no rate increase this year.

Because of the drought, DWP customers have experienced an average 45% increase in overall water rates since early 2012, Pickel said. But nearly all the additional money is going toward purchasing water, not fixing pipes, he said.

Jonathan Parfrey, director of the organization Climate Resolve and a former DWP commissioner, said it was a mistake not to raise rates and boost infrastructure improvements.

"This is part of running a major city," Parfrey said. "You can't let politics get in the way of serving the people of Los Angeles. It's irresponsible."

Councilman Paul Koretz said Tuesday's break could prod the city to pursue bigger, quicker increases in water rates. But he cautioned that there was only so much more money that ratepayers -- or the city -- could pony up to replace pipes.

"It would cost us a fortune to replace all of our water mains at once," said Koretz, who represents the area around UCLA. "I suspect even if we put every dime of the entire city budget in ... it wouldn't be resolved in 10 years."

The flooding left as much as 8 inches of silty water atop Pauley Pavilion's wood basketball court, the 49-year-old venue where legends such as Kareem Abdul-Jabbar, Bill Walton and Gail Goodrich once played. The water was even higher in some lower rooms, said UCLA spokeswoman Carol Stogsdill.

It was only two years ago that Pauley Pavilion finished a $136-million renovation, complete with an underground film and weight room.

Officials said it's too early to determine how much damage was caused.

Workers on Tuesday night were using brooms, squeegees, vacuums and floor cleaners to remove the water.

"It was horrendous. Full of water. Couldn't even drive up," said Joey Sheetrit, an employee cleaning up Pauley.

More than a foot of water flooded the subterranean spaces of Morgan Hall, which houses the campus athletic Hall of Fame.

"Unfortunately, UCLA was the sink for this water source," said UCLA Chancellor Gene Block. Of the damage to Pauley Pavilion, he said, "It's painful."

Two underground parking garages, lots 4 and 7, were flooded. About 200 cars were searched for trapped motorists. An LAFD swift-water rescue team with four inflatable boats stood by in case people were stranded.

DWP officials said they don't know what caused the line to break.

They said it will take some time for repairs to be made and that Sunset Boulevard could remain closed through Wednesday.

Officials said it took time to get crews to the scene through traffic and identify the correct valve to shut. An error, they said, could have caused other pipes to burst.

"It's a 30-inch water main pipe -- that's pretty big," said DWP spokeswoman Michelle Vargas. "We can't just shut it off automatically because that means water would shoot out to other parts of the water system, which would potentially cause other breaks."

Lauren Bernardy, 17, of Orange County was on the campus lacrosse field for a summer sports camp when water began flooding the field, streaming downhill from Sunset Boulevard.

"All of a sudden there's water rushing and we had to grab our things. We just started running and we were being chased by water," she said.

Lauren said she watched several cars try to drive out of the flooded parking garage only to wind up trapped.

Within five minutes, she said, the water had rushed from the edge of the lacrosse field to Drake Stadium. Other students near Pauley Pavilion could be seen walking in shin-deep water, she said, and water rushed underneath doors onto the floor of the basketball court.

Summer recreational activities held on campus will be canceled Wednesday but most other UCLA activities, including summer school classes and research, will resume, officials said.

The campus was arranging transportation home for people whose cars remain inaccessible in the flooded garages and is planning for ways to help them get back to campus Wednesday.

Many of the cars in the lowest levels of those underground parking structures sustained "considerable damage," Stogsdill said.

"The good news is that the campus is up and running," she said. "But areas are quite a mess."