Franco’s Child of God Heavy with Realism & Necrophilia, But We're Not Complaining 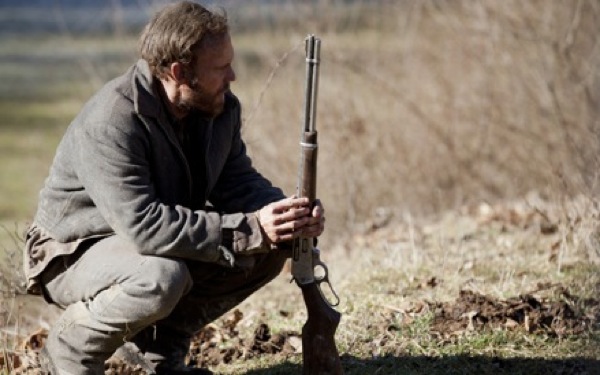 Scott Haze brilliant portrayal of Lester Ballad in Child of God will not go unnoticed.

If you’re looking for “shock value” in the next movie you see in theaters, look no further than the James Franco-directed biopic Child of God. But truthfully, “shock value” is just putting it mildly.

This disturbingly real and uncomfortable drama is set in a small, rural town, a town we actually don’t get to see that much of. Instead, we’re mostly in Tennessee’s Appalachian Mountains, where we find the transient, violent, hard-to-understand Lester Ballad (Scott Haze).

In a dripping Southern accent, the film’s narrator shares a bit of Lester’s history in the first chapter: his mom left him when he was little, his daddy committed suicide, and his family lost their land. For some reason, assuming as a result of all of this, the lonely man retreated to the outskirts of town, marking himself as a willful outcast. In present day, Lester runs through the woods with his rifle in hand as he hunts pheasants, trespasses onto others’ property in search of the occasional chicken or egg to steal and bring back to his barely standing wooden shack, and has run-ins with the town’s sheriff (Tim Blake Nelson).

At this point, Lester's behavior is pretty funny. In fact, there were quite a few loud chuckles coming from the audience as they watched Haze's perfect portrayal of the mumbling, disoriented, Southern smartass who might or might not be legitimately crazy. But as we get deeper into chapter two (and definitely chapter three), we see Lester crawl further into isolation, until he actually becomes a cave dweller. As we’ve seen in films such as Cast Away with Tom Hanks and “Wilson,” isolation can take a toll on any man, and this is when Child of God dives into the "extremely disturbing" category, even skimming the surface of horror.

At first, Lester is comparable to Hanks’ character, but instead of a volleyball, he turns three large stuffed animals that he won at a carnival into his companions. However, he moves on from inanimate objects to real people when he stumbles upon a young woman and man in a car, both of whom are dead from carbon monoxide poisoning. This is where Haze makes the audience most uncomfortable, as Lester develops a strong sexual attraction towards female corpses.

Because of the gross, necrophilia moments and the hard-to-watch realism, Child of God is probably not for the queasy, sensitive or weak-stomached. And it’s definitely not for those who get easily offended. With that being said, its star and director deserve much appreciation for “going there.”

The film is based off Cormac McCarthy’s (the same man who wrote No Country for Old Men) novel of the same name, and Franco stays true to the humor and shocking material found in the book. In a piece he wrote for the Daily Beast, Franco explained that the humor in McCarthy’s book “was a huge key for me when making the movie.” Although some audience members will probably be fighting the urge to leave their seats as they watch Child of God, most won’t because they're invested and even kind of like Lester. By no means is Lester any type of hero or anti-hero, but his humor keeps you in and draws out a little sympathy, despite all of the shocking, repelling material. Bravo, Franco.

And then there’s Haze, who we hope to see in many more films. The courageous actor gives us raw, unfiltered behavior that shows us rather than tells us what Lester is thinking and experiencing (we can probably attribute this feat to Franco’s directing skills as well). Haze is not afraid to drop his pants and go to the bathroom in front of the camera, have sex with a “dead” girl or spew out drool and snot in close-up shots. A nod also has to be given to his Southern accent, which was so strong and sometimes even unintelligible, a little reminiscent of Cuba Gooding Jr. in Radio. With that performance, it would be surprising if Haze doesn’t get some prestigious accolade (dare I say, at least an Oscar nomination?) or offered other roles.

It’s an interesting story (although some moments will probably make you close your eyes or even gag) about one man’s gradual descent into madness—put your faith in Child of God, and give it a well-deserved chance.

Child of God releases in Los Angeles at ArcLight Hollywood, in Orange at AMC Orange 30 and Irvine at University Town Center 6 on Friday, Aug. 1, 2014.