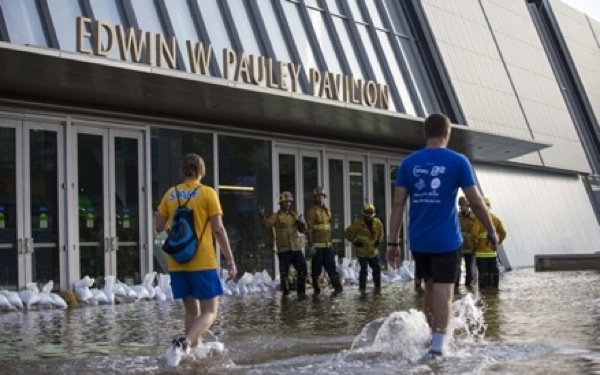 On Tuesday afternoon, around 3:30 p.m., a 90-year-old pipe broke, sending a geyser shooting 30 feet in the air, flooding Sunset Boulevard and UCLA with 8 million to 10 million gallons of water. The water deluged Pauley Pavilion, the J.D. Morgan Center, the George Kneller Academic Center, UCLA’s Athletic Hall of Fame and the John Wooden Center and Drake Stadium. Crews reportedly had to use squeegees and water vacuums to clear the water.

Although the flood was surely chaotic, tragic and possibly heartbreaking for many UCLA students, staff and alumni, college students always know how to look on the bright side of disasters.

Some students used the flood as an opportunity to create memes and take epic photos. Since UCLA’s school mascot is the Bruin, the phrase “UCLA be like” was plastered on pictures of bears standing in rivers to create hilarious memes.

Check out the photos that have been flood-ing social media channels!