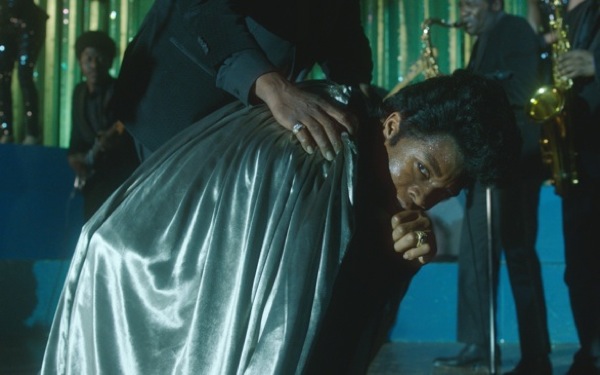 CHADWICK BOSEMAN as James Brown in Get on Up.
(Credit: Universal Pictures)

(MCT) Chadwick Boseman is not crazy.

He says so himself. Even makes a pretty convincing case for his sanity.

Still, he agreed to play James Brown in the biopic of the Hardest Working Man in Show Business, “Get on Up.”

So, you be the judge.

“You know what? I was not crazy,” Boseman says, recalling when director Tate Taylor (“The Help”) and producers Brian Grazer and Mick Jagger first offered him an audition. “I was smart enough to say no! But Tate is persistent and he’s persuasive. He pretty much talked me into it. That’s what it boils down to.”

Sure, Boseman has made a name for himself playing sports legends Floyd Little (“The Express”) and Jackie Robinson (“42”), as well as a fictional football player in this year’s “Draft Day.” The 32-year-old actor and playwright is obviously no stranger to physically demanding roles or well-known, real-life characters.

But the Godfather of Soul? Not only is capturing Brown’s unique way of singing — and speaking — a challenge beyond mortal ken, but if there’s ever been an unreproduceable stage presence, it was Brown’s manic form of psychodramatic dancing-cum-gymnastic performance art.

Boseman, who plays Brown from ages 16 to 63 in the movie, rehearsed for three days with choreographer Aakomon Jones just for the screen test. After that went over well, “We just went right to work,” Boseman reports.

“I mean, I celebrated for a few days — or, I stressed over it for a few days. Then through September and October, we just rehearsed. We officially had rehearsal five days a week, but I would come home at night and rehearse some more. They gave me a microphone, one of those old-school microphones. It just sat in the middle of the floor and I would go right to it and I’d do all the stuff you see me doing in the movie in my house.

“My neighbors all knew what was going on, they knew I was doing this movie. So they were, like, cool. I wrote them thank-you notes for not being upset at the noise.”

Although most of the film’s major concert reproductions were synched to actual Brown recordings, Boseman studied with legendary vocal coach Ron Anderson to nail the wails in private settings and a few of the more public scenes. The “Please, Please, Please” sequence is all Boseman’s voice.

“They gave me the best,” he says of the production. “It’s like they were, ‘If you’re gonna fail, it’s not gonna be because of us.’?”

Boseman did not go into the project without some background in Brownology. The singer was born in 1933 not far from Anderson, S.C., where Boseman grew up. Although Brown called Augusta, Ga. — about four hours away — home for most of his life, folks in Anderson have always staked a claim to him.

“You would always hear that James Brown was from Augusta, but people in South Carolina would have this argument that, no, he’s from South Carolina,” Boseman says. “I never actually believed them, you know what I’m saying? It was well-known that he was from Augusta. It was not until I did this movie that I finally understood what that debate was about.

“People would even go so far as to say, ‘I saw him in Anderson!’ At one point, it got a little out of control and some said he was from Anderson. But when Tate and I visited his house in Augusta, we found out that his masseuse was from Anderson, and he would come visit her because she was a friend. So the stories actually were real; they just didn’t make any sense.”

Though Brown, who died on Christmas Day in 2006, was an older generation’s superstar, Boseman was raised with the sounds of his soul and funk classics such as “Papa’s Got a Brand New Bag,” “Say It Loud — I’m Black and I’m Proud” and “Get on Up (I Feel Like Being a) Sex Machine,” from which the movie derives its title.

“I was aware of ‘I Got You,’ the songs that are his hits that you’ve got to know or else you’re not American,” Boseman says. “I mean, it would be impossible to not hear ‘I Feel Good’ or ‘I Got the Feelin’.’ ‘A Man’s World’ would be a little bit more rare, but I heard all of those songs, just because I have aunts, uncles, my mom, my dad. Somebody was going to play that music, and obviously I’ve seen the ‘Rocky’ movie (IV) where he did ‘Living in America.’?”

Great as Brown was, he was not always great to be around. The film opens with his infamous shooting up of a storefront church, and goes on to depict a sadistic egomaniac who belittled his band members, tormented his lifelong friend and creative partner Bobby Byrd (Nelsan Ellis) and was not above committing domestic violence.

To his credit, Boseman expresses these sides of Brown with cold-eyed commitment. But also with understanding.

“Some of his controlling came from the fact that he had the two people that you depend upon in your childhood leave you,” Boseman continues. When he was still a very young boy, Brown’s mother was essentially kicked out of their rural shack by his father. Soon after that, his dad dropped him off at an aunt’s Augusta brothel, where he spent the rest of his youth.

“What I definitely learned about him the most was that the same thing that creates your genius can also create your weaknesses.”

Sounds crazy, but that’s the way life is.