Amway Coaches Poll Results are in: UCLA in Top 10 While USC Rests at No. 15 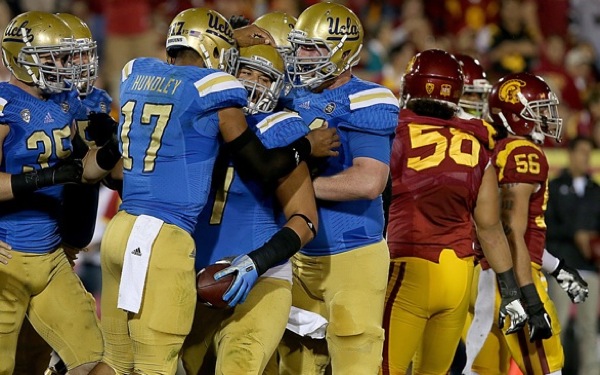 Another preseason college football poll's results have been released, and similar to the recent Pac-12 media poll, UCLA has beaten USC in the rankings.

In the Amway Coaches Poll, UCLA nabbed the No. 7 spot and USC grabbed No. 15.

According to USA Today, UCLA has quarterback Brett Hundley, wide receiver Devin Fuller and tailback Jordan James on its offense to help finish the 2014 season strong. With new coach Steve Sarkisian, the USC Trojans have a strong chance at finishing on top this season as well, especially with quarterback Cody Kessler and wide receiver Nelson Agholor.

The No. 1 team listed in the poll, however, is Florida State.

According to its website, the Amway Coaches Poll "is a season-long poll that establishes the weekly Top 25 football teams, as voted on by 64 Division 1 football coaches. It will be one of the tools that help determine who will play in the new College Football Playoff system in 2014." This preseason poll "will be updated weekly during the season for 17 weeks" via USA Today. ?