By Matt Stevens and Joseph Serna 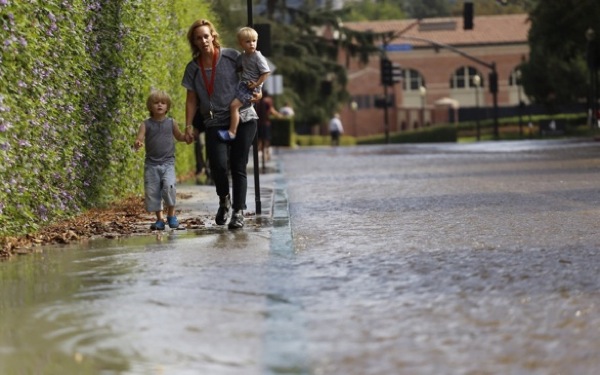 Standing water from a massive water main break that flooded two UCLA parking garages and marooned nearly 1,000 parked vehicles is expected to be completely pumped out by Friday night, but university officials cautioned they still need to inspect the structures to make sure they're safe.

“There will be a way for our department to get the vehicles out well before it’s safe for the public to get in,” Renée Fortier, director of UCLA Events and Transportation, said in a statement Thursday. “A lot of people think they should be able to go back into the structures immediately. With flooding, we have to make sure the structure is safe.”

The standing water inside the structure has been mixing with the gasoline and oils from the vehicles since Tuesday, creating a potentially toxic mix. Of the stranded cars, about 400 were “deemed to be inoperable due to the water damage,” UCLA spokesman Tod M. Tamberg told The Times.

Once owners return to their vehicles, the longer process of assessing the damage and seeking compensation will begin.

The water main break occurred on a 30-inch riveted steel trunk line underneath Sunset Boulevard owned by the Los Angeles Department of Water and Power, sending more than 20 million gallons of water coursing across the Westwood campus for hours.

Along with the flooded parking structures, the floor of Pauley Pavilion -- the school’s storied basketball arena -- was warped by several inches of standing water.

Chancellor Gene Block could not provide an exact estimate of the damage Wednesday, but said it likely was in the millions of dollars.

The DWP, which hired an inspector to appraise the damaged vehicles, has directed affected owners to its website to file a claim for damages.

UCLA, meanwhile, has launched a fundraising campaign that officials hope will raise $1 million in the next 60 days. The UCLA Spark crowdfunding page calls the flood “one of the largest emergencies we’ve ever faced” and sets a goal of having damaged facilities open and restored by the time the fall quarter begins in late September.

Meanwhile, DWP said it is preparing to replace the ruptured line Friday. The break occurred at a Y-connection with a 36-inch water main, which made the repairs all the more complicated, officials said. Crews had to dig a 56-by-41 foot excavation pit to work on the repairs, closing a large stretch of Sunset Boulevard north of the campus for most of the week.

The repairs are expected to be completed early Saturday, after which DWP is expected to refill the street and prepare it for repavement.

The utility initially endured heavy criticism from residents and city officials for its response. Even after the main leak was stopped, the lines continued leaking 1,000 gallons of water a minute for a day.

“Our tireless crews are working around the clock to safely and swiftly repair this main so the famous Sunset Blvd can be open for commuters,” DWP tweeted. “Westsiders, UCLA community and area commuters: thank you for bearing with us! We are working to get out of here & give you your street back.”