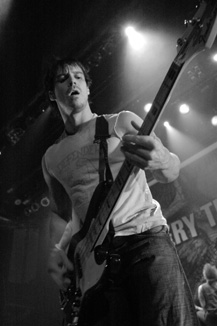 Hollywood’s hardcore scene was out in full force, meaning lots of tight jeans, black shirts, boys in makeup and MySpace whores. Luckily, the bands playing were much better than their audience might lead one to believe.

Opening bands at hardcore shows are usually worth missing. They’re dime-a-dozen, piss-poor musicians. Warm bodies to fill a stage while kids wait for the headliners. One might think the Indianapolis fivesome Haste the Day would fit that role quite well, but the band put on a surprisingly engaging, lively and aurally pleasing performance. Go figure.

Fellow opener Between the Buried and Me, however, was considerably more prone to the aforementioned stigma. While artsy hardcore is good in theory, the band fell flat in its delivery. Uninspired and tiresome, the group lacked the energy to give its set any punch. Next, please.

Thankfully, Every Time I Die would appear to epitomize good, fun, recklessly chaotic hardcore. Taking stage to the sounds of tiger growling, as its members were likewise poised to attack, the band exploded with current single "Kill the Music." Continuing with songs off its latest release, Gutter Phenomenon, and its cult favorite previous release, Hot Damn!, the band was charmingly cocky and proud of it.

While there were some anti-ETID club members in attendance, heckling every chance they got, the band thrives on that kind of attention. The members are unapologetic for everything they do, which plays a big part in why ETID is such a fun band to watch. Either way, they still had the vast majority of the venue singing along as frontman Keith Buckley snarled, hissed and screeched his way through fan favorites "Romeo A Go-Go" and "Tusk and Temper."

Hulking archetypes of bro-ness, guitarist Jordan Buckley and bassist Chris Byrnes were dynamic showmen on their axes, making it look so easy but likely making any other guitarist or bassist watching wonder how they could compare.

Closing with their definitive song, "Ebolarama," the members of Every Time I Die never fail to please themselves it seems, and if they happen to please a few others in the process, well, that’s cool too.

While following a hard act to top, Bleeding Through was intent on showing why their new album, The Truth, kicks the ass of any other hardcore album that has or will come out this year. Opening with its first track, "For Love and Failing," the Orange County natives made it clear from the start that they meant business.

And lo and behold, front man Brandan Schieppati revealed he really can hold those vocal melodies he and his band are now so fond of. At least in between his trademarked tumbling across the stage and diving into the audience, that is.

As the deafening crowd yelled louder and louder, the band cued the spoken words that begin their previous album, This Is Love, This Is Murderous. As the crowd screamed in unison, "There was a firefight!" the band launched into "Love Lost in a Hail of Gunfire" and the crowd erupted into a frenzy of flailing bodies.

Bleeding Through has matured considerably with the release of The Truth, but some things never change. Brandan still drops the f-bomb every three to five words. Derek Youngsma’s drumming and Marta’s gothy keyboards remain the mood-setting backbone of each song. Guitarists Scott Danough and Brian Leppke still shred like no others. More controlled and calculated in their execution, the band showed how much tighter of a musical unit they’ve become without losing their youthful energy.

It would be nice, however, to see some band members extrovert themselves and be more interactive with the audience, as Schieppati shouldn’t have to carry the full weight.

Nevertheless, Bleeding Through has shown it can evolve, effectively shutting down any that would label the band predictable. Just add those people to the list of opposition the band gladly gives the middle finger to.
Article posted on 2/27/2006
This article has been viewed 1139 times.