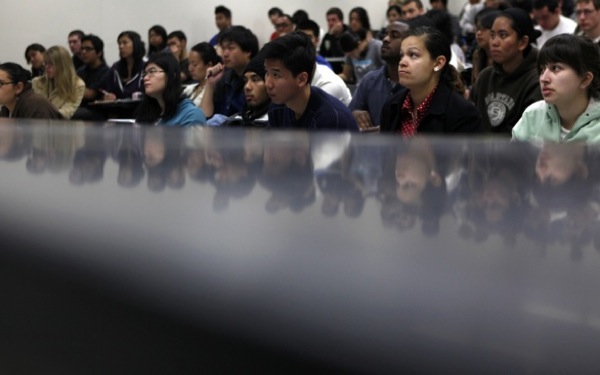 (MCT) California State University campuses are charging students huge fees for something their tuition is supposed to cover -- classes.

In the past five years, some schools have shifted classes that were covered by tuition to special sessions, where single courses can cost more than $1,000 each, on top of a student's annual tuition of about $5,500.

"It is hard, but it was a choice I had to make if I wanted to graduate on time," said Laura Montes, an accounting major at San Jose State who paid $1,050 extra for a summer writing course that was overbooked during the regular school year.

Between 2007 and 2012, San Jose State alone cut back regular class offerings for 281 courses while adding more expensive versions funded almost entirely by student fees, according to a critical study of three campuses by California's state auditor.

CSU Long Beach cut access to 398 courses and CSU Sacramento cut back 177 courses as they increased special sessions of the same classes, the audit revealed.

While the audit did not examine other schools, enrollment figures show a dramatic expansion of special session courses across the system.

CSU East Bay is offering special sessions this summer, at $724 a course -- much less than San Jose State.

Decades ago, Cal State created its "extended education programs," which offer the special classes, for job training and enrichment -- not for full-time college students. But by last summer, more than 57,000 college students took the special courses -- 17 times the number who took them in 2008.

What's more, San Jose State and other campuses socked away surpluses from the courses. San Jose State's reserve once reached $28 million, more than twice its CSU limit. Similar programs at CSU Sacramento and CSU Long Beach had reserves of nearly $11 million each in 2012, according to the audit.

"Extended education has become a cash cow for local campuses," said Susan Meisenhelder, a professor emeritus at CSU San Bernardino and a former president of the California Faculty Association. "It's pushed with all this warm and fuzzy access rhetoric, but it's really to generate revenue."

San Jose State's leaders refused to respond to several interview requests for information about its special course fees and reserve.

Charging full-time students extra for courses their tuition is supposed to buy has set the system on a troubling course, say students and some faculty and lawmakers. And, because need-based state university grants don't cover the cost of such classes, the policy could harm CSU's many low-income students, they say.

The shift came at the height of the state budget crisis, after CSU's former chancellor in late 2009 allowed campus presidents to expand their high-cost special classes in the summer.

Some students sued in 2010, arguing that state law prohibited replacing, or "supplanting," regular classes with the special ones. CSU won the case, arguing that it violated no law as long as it didn't eliminate a required course from regular session, even if it reduced the number of classes for it.

Now, the Legislature is considering how to more narrowly define the term "supplant" to prevent CSU from adding special sessions of courses that have been trimmed back in regular session.

Assemblyman Adam Gray, D-Merced, wanted to make the special class fees equivalent to a regular session class fees for students forced to enroll in them because they couldn't get into a regular course.

But CSU fought to defeat the bill.

"The measure is an extreme response to a very specific issue and will harm students and faculty," wrote Karen Zamarripa, CSU vice chancellor for advocacy and state relations, in a letter opposing Gray's bill.

CSU is doing its best to help students after severe budget cuts during the recession, Zamarripa and other CSU officials have argued.

"We're interested in meeting the demands that students have for courses, and any method that allows us to do that is important," said Brad Wells, CSU East Bay's vice president of administration and finance.

The compromise legislation by Gray and Das Williams, the Assembly's Higher Education Committee chairman, would let CSU expand fee-based courses at the expense of regular classes only if state funding drops. AB2610 might not reverse the practice, said Gray, but it will "stop the bleeding."

"We've sent a clear message to the CSU system what the expectations are for students," he said.

Meanwhile, as students pay extra, some campuses -- which set their own prices for the courses -- are making money from the classes. State law and CSU policy allow schools to charge fees for a program's cost and a small reserve, but the December audit found the schools routinely had multimillion-dollar surpluses.

San Jose State hiked its summer-course price by more than $200 in 2012, the audit report said, even though the administration expected the fees would bring in $2 million more than the classes cost. The auditor said the school had no adequate justification for the increase.

"I think if more people knew that, they would be upset, because who wouldn't?" Montes said after learning of the reserve. The special class fee is "money we really don't have, and to find out perhaps it's not necessary to spend that much money is upsetting."

CSU administrators say the courses are merely optional, not required. Students don't always feel they have a choice.

If she had been able to get into a writing course during the year, San Jose State student Jevon Vines said, she wouldn't be spending her summer writing essays. But, like other students, she didn't want to risk delaying graduation and paying an extra semester's tuition.

"If I hadn't taken it in the summer I probably never would have gotten it during the regular semester," she said.