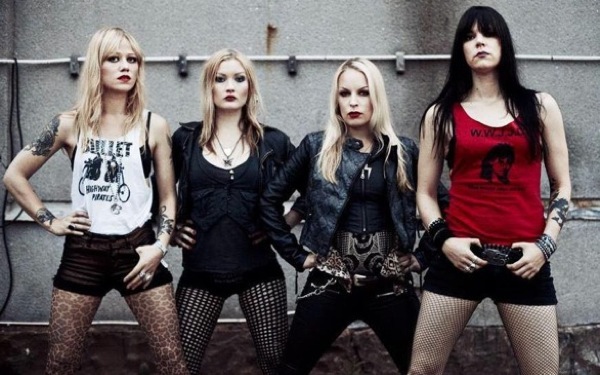 Does Motley Crue have sisters? You’d sure think so listening to “I Sell My Kids for Rock ‘n’ Roll,” the opening cut on Crucified Barbara's rowdy new album In The Red.

An all-woman hard rock/metal band from Sweden, Crucified Barbara's members get a little playful with their stage names; the foursome consists of Mia Coldheart, Ida Evileye, Klara Force and Nicki Wicked. But if you think they’re fooling around otherwise, you’re mistaken.

Give a listen to the Megadeth-tinged “To Kill a Man,” the Motorhead-like speed rock of “Follow the Stream” and the guitar grinding, head banging yet melodic title cut.

Singer Coldheart coos sweetly once in a while when she wants to tease a little, but her whisky-and-cigarettes voice is more venom than sugar as she rocks through scorchers such as “Shadows.”  Her voice is tempered only slightly when she professes her loyalty to a kindred spirit on “Lunatic #1.”

And about the obligatory stripped-down, tender moment; there ain’t one. In the Red starts out loud and proud and never lets up in the least. With Coldheart’s growl, Force’s screaming guitar and a perfect balance of heaviness and melody, Crucified Barbara has a sound that’ll win legions of fans as they continue their conquest of America.

“I am trouble, you’re in danger,” warns Coldheart on the come-hither “Do You Want Me.” That’s okay; bring it on.