We are the Fury: Call Them the Infinite Jesters 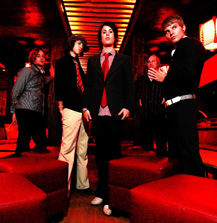 Just to get a few things straight right off the bat, the members of We are the Fury don’t have any plans for changing the world. They won’t push any political beliefs on you, and their music isn’t ridden with any hidden messages or ulterior motives.

Really, the band just wants to have a good time in hopes that others will hear its music and do the same. Simply listening to the band’s vigorous, electro-rock tunes may be validation enough, but frontman Jeremy Lublin says that in order to get the full We are the Fury experience, it’s all about seeing them live.

"I think we owe it to our band and to the people that come to see us to put on a show that’s energetic and fun," he says. "I hate going to shows where I’m bored off my ass, and I wouldn’t want to put on a show like that. With the Internet and DVDs, you can watch concerts on television, but there’s a difference in going to a show and feeling like you’re part of something."

Brought together by a common love for making music, the handful of childhood friends began their quest as musicians by picking up a few instruments and rocking out the only way they knew how – with some heavy metal.

But along with age came personal growth and better understanding and appreciation for more classic styles of music.

Turning away from the "harder stuff" the guys grew up on, resulted in a danceable combination of glam rock and quirky post punk, that Lublin admits initially had people in shock.

"We kind of got the backlash of it all but a lot of fans of our previous band are starting to get what we are doing."

Other people are starting to get it too and East West Records, well, they got it from the very start.

"A lot of labels seem to go after the same thing because if one person likes it, they all like it. But we wanted a label that liked us regardless of what people thought," Lublin says. "It’s important to us to have someone who has the same vision as us and really gets what we’re doing."

Since releasing their debut EP, Infinite Jest, in January, these five purveyors of fun – rounded out by Chris Hatfield on guitar, Alan Hoffar on bass, Stephan Lublin on drums and Todd Wherlon on keyboards – have been taking on one city at a time and are thrilled to be getting their name out beyond their hometown of Toledo, Ohio.

"A lot of people are trying to get out of Ohio," says Lublin. "While the music scene is versatile there’s not really any venues left for indie bands to play."

Having just wrapped up a successful tour with Head Automatica, the band will be making a quick stop at SXSW, before joining Matchbook Romance on select dates of the Take Action Tour.

Although the band recognizes the significance behind the tour (to raise suicide awareness) the band prefers to be known as a feel good, party band rather than a band pushing a specific cause.

"We are not a political band … but at the same time, I think the most important thing about our music is getting people involved and making them feel like they are part of something, so we are always inviting people to come out and have a good time," Lublin explains. "If you can be part of something, I think you’re better off."

We are the Fury’s Infinite Jest is currently available. The band will release its full-length album this summer. For more information, visit www.myspace.com/thefury or www.wearethefury.net.
Article posted on 2/27/2006
This article has been viewed 2653 times.