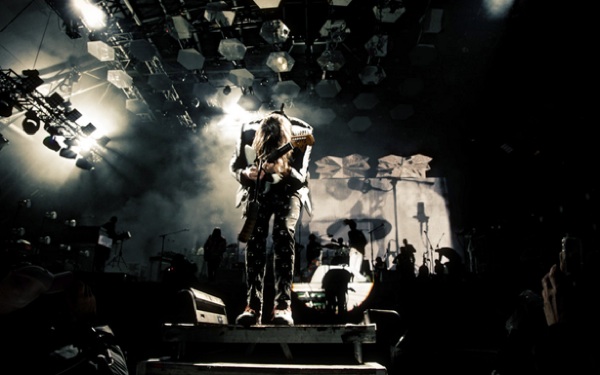 (Note: NOT a photo from the L.A. show)
(Credit: facebook.com/arcadefire)

The first thing I noticed when I walked into the Forum Friday night was that the place felt big and empty. Sure, most (if not all) of the seats at the venue had been sold that night, but whether or not they were filled was a different story. Big patches of vacant seats and a seemingly half-full floor space took a definitive level of energy out of the air.

So, why was the Forum so empty? It might have had to do with the fact that the Jay Z/Beyoncé spectacle was happening across town at the Rose Bowl. It could also have just been that a lot of would-be ticket buyers had already seen Arcade Fire at Coachella. And for those that caught the band at Coachella instead of this past weekend, you might have seen the better of the two performances.

Those festival performances, particularly the Coachella performance, really seem to work the band members up. It’s like they have something to prove, and it shows in a variety of ways (and not just with lead vocalist Win Butler accusing the VIP section of being a bunch of tasteless social climbers).

Butler opened the set at the Forum by relishing in the fact that he was surrounded by “true fans,” meaning that after a summer of performing at different festivals where viewers in the front row may or may not have been Arcade Fire fans, the band was finally playing for people who came exclusively for its music. It’s not that Arcade Fire is pretentious; it’s just that the band has a strange act, and it needs audience participation from a crowd that understands the band in order for the gag to actually work.

The first song of the night was the band’s most current hit, “Reflektor,” which was a good choice for an opener. It’s energetic and fun, you can dig it, but it’s also one of those tracks that you want to get out of the way early.

Overall, Friday’s performance was goofy and well executed. However, the band interacted oddly with the crowd. In an attempt to make this performance seem particularly genuine, Butler (and truly it was Butler because the rest of the band doesn’t talk) had a very nonchalant attitude about the whole thing.

There were a few fun gimmicks that the band threw in that got the crowd going, like a partial cover of  “Been Caught Stealing” by Jane’s Addiction, though. There was also the air band performance of “Sweet Child of Mine” from the B-Stage with the band wearing its signature big heads from this Reflektor Tour.

It was all very fun, but the way it was put together came off as, dare I say, lazy.

It was a good show (it’s Arcade Fire, after all), and everything goes out the window anyways when the band goes into its signature closer, “Wake Up.” I mean really, that song is incredible; it gets you every time.

But still, Arcade Fire can do better.