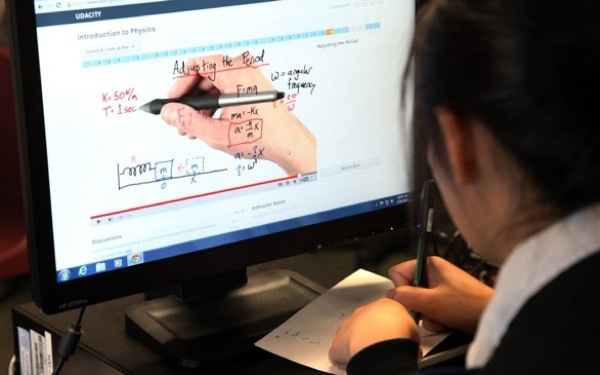 A student goes through an online lesson in physics.
(Credit: Laura A. Oda/Bay Area News Group/MCT)

(MCT) One year has passed since Julie Spitzer, professor of mathematics education at San Jose State University, taught her last online course to thousands of students across the country through a partnership between SJSU and Udacity.

The SJSU Plus pilot program, launched to great fanfare in the spring 2013 term, was put on hiatus and then scrapped altogether after pass rates for spring and summer courses lagged behind rates for face-to-face equivalents.

Though Spitzer said she would gladly teach another such class, known as a Massive Open Online Course, (MOOC), and still uses some of the course materials she developed with Udacity, the end of the pilot quieted voices that had been hailing affordable, massive-scale online courses as a solution to crowding woes and low graduation rates in the California State University system.

Administrators and state officials, however, say innovation in online education remains a priority for the country’s largest university system.

“Udacity was an experiment in a longer and much broader initiative of the CSU engaging in online materials for our students,” said Gerard Hanley, assistant vice chancellor for academic technology services.

What innovation will look like, who will control it and how much it will alter online teaching (which has been a part of CSU offerings for 20 years) remain open questions.

Assembly Bill 46, authored by Richard Pan D-Sacramento, seeks to ensure that the answers to those questions are shaped in part by data about student achievement in online courses.

The bill, which bypassed the Senate Appropriations Committee because it was found to have a low cost, could be voted on in the Senate as early as Wednesday. The legislation would require providers of online courses to share information about course enrollment and completion rates, grades, student demographics and the use of university resources such as libraries with the CSU Academic Senate, the body that represents faculty from the 23 CSU campuses.

Pan said he wrote the bill in response to concern that the faculty group lacked sufficient access to data during the SJSU Plus pilot program. Though the partnership with Udacity has ended, Pan wants to be certain that any companies the CSU works with in the future will be accountable for providing positive outcomes for students.

“If we’re going to talk about online education, we need to be sure the faculty have the information they need to engage the students,” Pan said. “We’re not asking for a whole lot. What we can’t do is have an organization say, ‘Well, we don’t want to share this information with you.’ ”

Cay Horstmann, a professor in the computer science department at SJSU, taught the SJSU Plus introduction to programming course during the summer of 2013. He said using Udacity as a platform for a university course created data collection problems.

“Instructors didn’t have an easy time getting access to data,” Horstmann said. “It seemed more of a technical issue than Udacity’s unwillingness to provide it, because their platform hadn’t really been designed to run courses for universities.”

Hanley views the bill as an overreaction to shortcomings of the terminated Udacity pilot and an excessive burden on the university system, given that all online courses currently offered are run by CSU faculty. Though private companies such as Blackboard provide crucial elements such as the “learning management systems” used as hubs for online and face-to-face courses alike, they are not as involved as Udacity was in the SJSU Plus courses.

Hanley said individual faculty members who teach online courses already have the data they need, and that CSU focuses on using data to evaluate the quality of its courses.

“We agree with the research agenda of the bill,” Hanley said. “We want to find innovation. But how to go about that is where we have disagreement.”

Gov. Jerry Brown has been a high-profile supporter of expanding online course offerings at California’s public universities. The Udacity-SJSU partnership was sparked by a phone call from Brown to Udacity founder and Stanford professor Sebastian Thrun. Evan Westrup, a spokesman for Brown, said he could not comment on AB 46 as the legislation is pending.

H.D. Palmer, spokesman for the California Department of Finance, said the budget Brown signed in June includes $50 million to create a program called the Awards for Innovation in Higher Education. Community colleges and CSU and UC campuses will compete to be awarded for initiatives that increase four-year graduation rates and the number of bachelor’s degrees awarded.

“We think it’s likely that online education will come into play as part of this $50 million awards program,” Palmer said.

Palmer said the Brown administration sees innovation in online education as a potential solution to a broad challenge facing the CSU: raising graduation rates while keeping tuition flat. In 2010, the systemwide six-year graduation rate was 46 percent, according to a report by the CSU Graduation Initiative.

Expanding online courses could reduce bottlenecks that arise when classes are too small to accommodate all the students who need credit from the course, Palmer said. A survey presented to the CSU Board of Trustees in September 2013 found nearly 1,300 bottleneck courses across the system.

Legislation passed last year requires the CSU to gradually make all of its online courses accessible systemwide through a program called CourseMatch. This summer, all CSU students had access to 710 courses taught by faculty all over the state, Hanley said. As more courses become accessible through CourseMatch, a freshman at California State University, Sacramento, may have the option of taking a course taught online by a professor at CSU Los Angeles to fulfill general education requirements.

Lillian Taiz, professor of history at CSU Los Angeles and president of the California Faculty Association, said most professors are not concerned by existing online programs because, unlike MOOCs, they’re not designed to serve thousands of people at a time, enabling greater interaction between teachers and students.

Spitzer said she questioned why the legislation requires data collection for only online courses and not face-to-face classes as well, given that CSU faculty teach all of the online courses on offer.

“The whole online-MOOC movement, it still hasn’t been thoroughly researched and everybody’s kind of suspicious about it,” Spitzer said. “But it’s just another tool.”

Unlike Horstmann, Spitzer said she had had no trouble accessing data about her students during the pilot project.

Pan said he thinks his legislation is important for all online classes, not only MOOCs, because the online learning format may be less effective for certain groups of students. Collecting demographic data will allow the CSU’s faculty group to determine how best to move forward with any online courses, Pan believes, as well as ensure rigor.

Some students take online courses because they assume the courses will be less difficult than courses on campus.

Sophia Anthony, a senior public relations major at Sacramento State, said she and most of her friends had taken several online courses to fulfill general education requirements.

“We do it for the credits, not the education, to be honest,” Anthony said.

She also noticed greater cheating in online courses. In many cases, there’s nothing to stop students from Googling the answers to online tests. She recalled one exam where someone else had searched for every question on Yahoo Answers.

Anthony’s experience raises challenges that legislation may not be able to address. Where existing online courses and laws governing them fail, the market might succeed, said Brian Fleming, a senior analyst at education consulting company Eduventures. Because university systems like the CSU want to increase online offerings while preserving quality, companies in a crowded field have an incentive to deliver.

Fleming said that given the size and national prominence of the CSU system, major changes to its online course policies could make education companies take note.

“If I’m a strategist for a third-party vendor, I’m looking at this bill and saying these issues around data and data integrity are going to be more important moving forward,” Fleming said. “We need to be quicker and we need to be prepared to explain what the data says and doesn’t say.”

Taiz believes that any expansion of online courses in the CSU system will increasingly involve private companies that will seek to enhance profitability by making classes larger and less individualized. She supports both the legislation and efforts to expand online education, provided it’s done right. Taiz is not concerned that greater regulation will make companies more reluctant to form partnerships with the CSU system.

“There’s just so much money to be made here,” Taiz said.