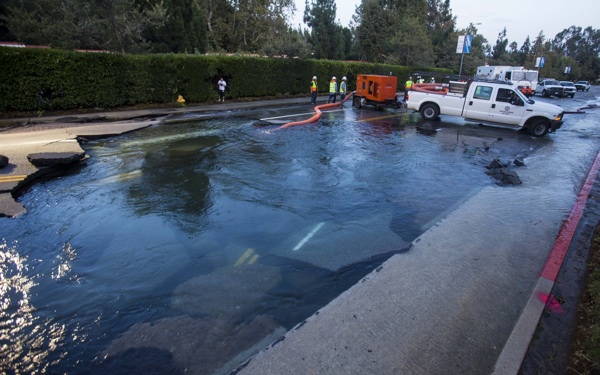 (MCT) Inside two parking lots at Jackie Robinson Stadium on Tuesday, about 340 cars caked in mud were lined up waiting for their owners to pick them up.

A week earlier, a water-main break on Sunset Boulevard sent more than 20 million gallons of water onto the UCLA campus and surrounding streets, flooding parking lots 4 and 7. Among the more than 900 vehicles that were reportedly parked inside, some clearly fared better than others.

Last week, a Westwood parking lot was full of smiles as students and staff reunited with their unharmed vehicles, backed into spaces one by one.

But Tuesday there was no jubilation as owners streamed in behind a batting cage -- first signing in with university officials, then moving to one of several insurance kiosks staffed with adjusters.

The vehicles had numbers painted in white on the windshields. Some had trunks and windows open, most were covered in layers of dirt and grime.

Eugene Acosta, 39, and his family stood next to their 2012 Honda Pilot near the front of one of the lots. The floodwater had come up to the dashboard, he said. Dirt was caked completely around the SUV up to the windows.

From inside, he retrieved dozens of objects -- a tattered umbrella, headphones, a wallet and cellphone chargers, even a full stroller -- and arranged them on the asphalt in front of him as he talked to an insurance adjustor.

Immediately after the flood started, Acosta said he tried to retrieve the SUV from Parking Lot 4, but got stuck in knee-deep water about 15 feet away before fire personnel ordered him to leave.

After seeing news photos of the flooded garage, Acosta said he knew it'd be a total loss.

Living without the family car over the last week, he added, has been “overwhelming and stressful.”

“It's a waiting game now, and it stresses me out,"  he said Tuesday. "That’s my new stress, getting fair market value for the car.”

UCLA officials have said repeatedly that the Los Angeles Department of Water and Power should bear responsibility for flood damage on campus.

"Our stance is that DWP has responsibility and at this particular point, they seem to be accepting that responsibility," UCLA spokesman Tod Tamberg said.

The university has launched a $1-million fundraising campaign to assist affected students and teachers as well as help with building repairs.

About 400 vehicles were expected to be declared total losses because of there water damage, university officials said.

Along with the flooded parking structures, the floor of Pauley Pavilion -- the school’s storied basketball arena -- was warped by several inches of standing water.

Although university officials have not given an exact figure, they've said the total damage is likely to be in the millions of dollars.

The DWP, which hired an inspector to appraise the damaged vehicles, has directed affected owners to its website to file a claim for damages. People have until Jan. 29, 2015, to file, the DWP said.